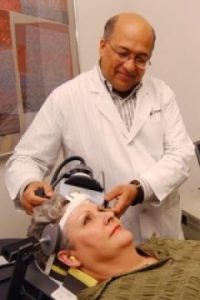 Husain is interested in putting to rest misconceptions about the safety and efficacy of ECT.

Few treatments have proven as controversial and effective as electroconvulsive therapy (ECT), or ‘shock therapy’ in common parlance.

Hippocrates himself saw the therapeutic benefits of inducing seizures in patients with mental illness, observing that convulsions caused by malaria helped attenuate symptoms of mental illness. However, depictions of ECT as a form of medical abuse, as in the infamous scene from One Flew Over the Cuckoo’s Nest, have prevented ECT from becoming a first-line psychiatric treatment.

Husain, from the University of Texas Southwestern, delivered a comprehensive lecture on neuromodulation, a term for the emerging subspecialty of psychiatric medicine that focuses on physiological treatments that are not medication. 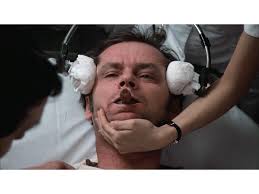 The image most people have of ECT is probably the gruesome depiction seen in “One Flew Over the Cuckoo’s Nest.”

Husain began his lecture by stating that ECT is one of the most effective treatments for psychiatric illness. While medication and therapy are helpful for many people with depression, a considerable proportion of patients’ depression can be categorized as “treatment resistant depression” (TRD). In one of the largest controlled experiments of ECT, Husain and colleagues showed that 82 percent of TRD patients treated with ECT were remitted. While this remission rate is impressive, the rate at which remitted individuals experience a relapse into symptoms is also substantial – over 50% of remitted individuals will experience relapse.

From this study, Husain made an interesting observation – the people who were doing best in the 6 months after ECT were elderly patients. He then set out to study the best form of treatment for these depressed elderly patients.

Typically, ECT involves stimulation of both sides of the brain (bilateral), but this treatment is associated with adverse cognitive effects like memory loss. Using right unilateral ECT effectively decreased cognitive side effects while maintaining an appreciable remission rate.

After the initial treatment, patients were again assigned to either receive continued drug treatment or continued ECT. In contrast to the previous study, however, the treatment for continued ECT was designed based on the individual patients’ ratings from a commonly used depression scaling system.

The results of this study show the potential that ECT has in becoming a more common treatment for major depressive disorder: maintenance ECT showed a lower relapse rate than drug treatment following initial ECT. If psychiatrists become more flexible in their prescription of ECT, adjusting the treatment plan to accommodate the changing needs of the patients, a disorder that is exceedingly difficult to treat could become more manageable.

In addition to discussing ECT, Husain shared his research into other methods of neuromodulation, including Magnetic Seizure Therapy (MST). MST uses magnetic fields to induce seizures in a more localized region of the brain than available via ECT.

Importantly, MST does not cause the cognitive deficits observed in patients who receive ECT. Husain’s preliminary investigation found that a treatment course relying on MST was comparable in efficacy to ECT. While further research is needed, Husain is hopeful in the possibilities that interventional psychiatry can provide for severely depressed patients.