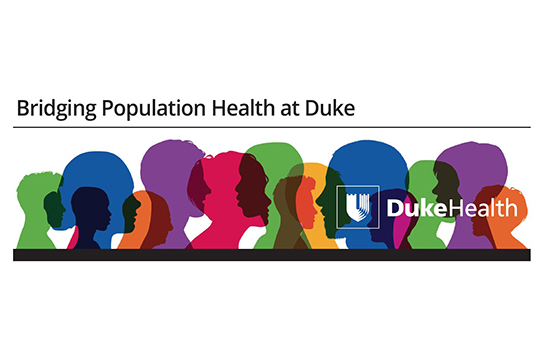 ‘Population Health’ is the basis of a new department in the School of Medicine, a byword for a lot of new activity across campus , and on Tuesday the subject of a half-day symposium that attempted to bring all this energy together. 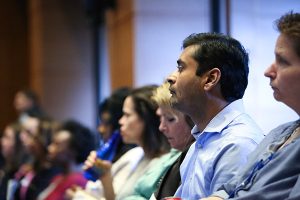 “We’re still struggling with a good definition of what population health is,” said keynote speaker Clay Johnston, MD, PhD, dean of the new Dell School of Medicine in Austin, Texas. Smoking cessation programs are something most everyone would agree is taking care of the population outside of the clinic. But improved water quality? Where does that fit?

“We have an intense focus on doctors and their tools,” Johnston said. Our healthcare system is optimized for maximum efficiency in fee-for-service care, that is, getting the most revenue out of the most transactions. “But most of health is outside the clinic,” Johnston said.

Perhaps as a result, the United States pays much more for health care, but lives less well, he said. “We are noticeably off the curve,” when compared to health care costs and outcomes in other countries. 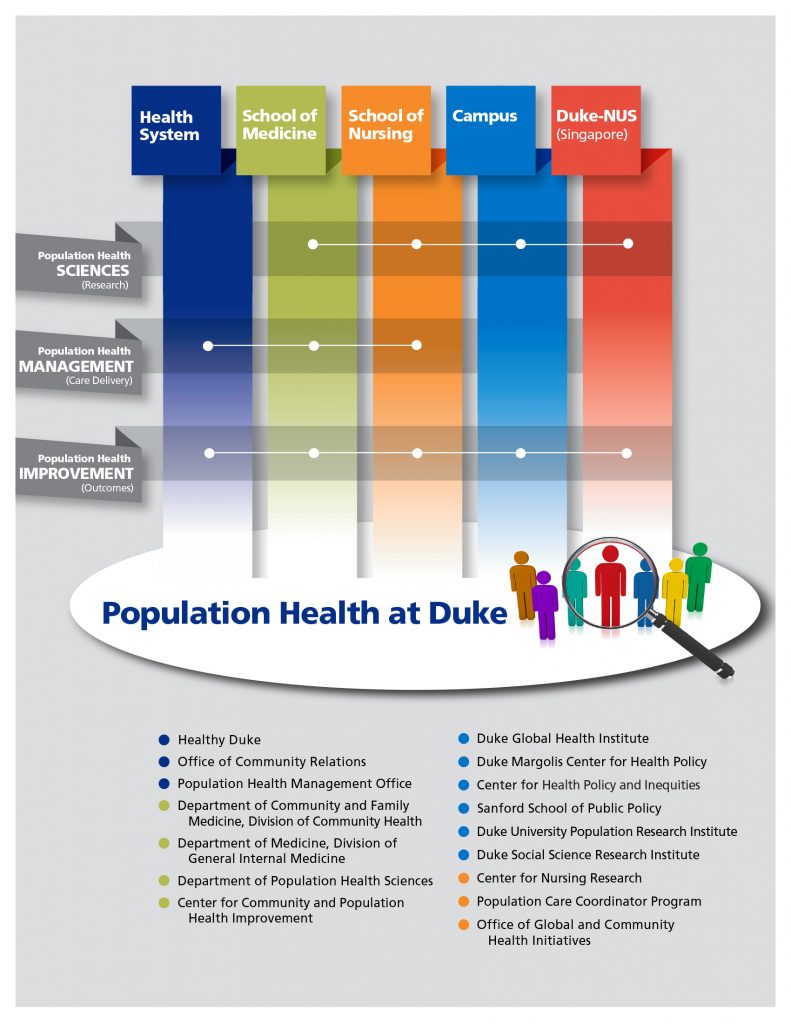 This graphic from a handout shared at the conference shows how population health spans the entire university.

As an example of what might be achieved in population health with some re-thinking and a shift in resources, the Dell School went after the issue of joint pain with input from their engineering and business schools. Rather than diagnosing people toward an orthopedic surgery – for which there was a waitlist of about 14 months – their system worked with patients on alternatives, such as weight loss, physical therapy and behavioral changes before surgery. The 14-month backlog was gone in just three months. Surgeries still happen, of course, but not if they can be comfortably delayed or avoided.

“Payment for prevention needs serious work,” Johnston said. “You need to get people to buy into it,” but in diabetes or depression for example, employers should stand to gain a lot from having healthier employees who miss fewer days, he said. 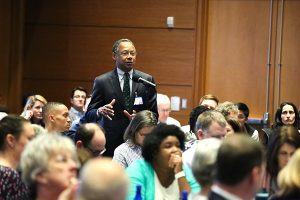 Other examples flowed freely the rest of the afternoon. Duke is testing virtual ‘telemedicine’ appointments versus office visits. Evidence-based prenatal care is being applied to try to avoid expensive neonatal ICU care. Primary care and Emergency Department physicians are being equipped with an app that helps them steer sickle cell patients to appropriate care resources so that they might avoid expensive ED visits.

Family practitioner Eugenie Komives, MD, is part of a team using artificial intelligence and machine learning to try to predict which patients are most likely to be hospitalized in the next six months. That prediction, in turn, can guide primary care physicians and care managers to pay special attention to these patients to help them avoid the hospital. The system is constantly being evaluated, she added. “We don’t want to be doing this if it doesn’t work.”

Community health measures like walkability and grocery stores are being mapped for Durham County on a site called Durham Neighborhood Compass, said Michelle Lyn, MBA, chief of the division of community health. The aim is not only to see where improvements can be made, but to democratize population health information and put it in peoples’ hands. “(Community members) will have ideas we never could have thought of,” Lyn said. “We will be able to see change across our neighborhoods and community.”

Health Affairs Chancellor and Duke Health CEO Eugene Washington, MD, has made population health one of the themes of his leadership. “We really take seriously this notion of shaping the future of population health,” he said in his introductory remarks. “When I think of the future, I think about how well-positioned we are to have impact on the lives of the community we serve.”

Lesley Curtis, PhD, chair of the newly formed Department of Population Health Sciences in the School of Medicine, said Duke is creating an environment where this kind of work can happen.

“I, as an organizer of this, didn’t know about half of these projects today!” Curtis said. “There’s so much going on at an organic level that the challenge to us is to identify what’s going on and figure out how to go forward at scale.”