A team of scientists from Duke, the National Institutes of Health and Johns Hopkins biomedical engineering has found that the formation and retrieval of new memories relies on disorganized brain waves, not organized ones, which is somewhat contrary to what neuroscientists have previously believed. Brain waves, or oscillations, are the brain’s way of organizing activity and are known to be important to learning, memory, and thinking. 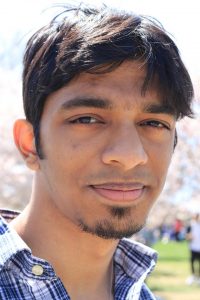 Although brain waves have been measured and studied for decades, neuroscientists still aren’t sure what they mean and whether or not they help cognition, said Alex Vaz, an M.D.-Ph.D. student at Duke who is the first author on the paper.

In a study appearing Jan. 6 in NeuroImage, the neuroscientists showed that brain activity became less synchronized during the formation and retrieval of new memories. This was particularly true in a brain region known as the medial temporal lobe, a structure thought to play a critical role in the formation of both short-term and long-term memories

Excessive synchronization of brain oscillations has been implicated in Parkinson’s disease, epilepsy, and even psychiatric disorders. Decreasing brain wave synchronization by electrical stimulation deep in the brain has been found to decrease the tremors of Parkinson’s. But the understanding of brain waves in movement disorders is ahead of the understanding of human memory.

The researchers had neurosurgeons at the National Institutes of Health implant recording electrodes onto the brain surface of 33 epileptic patients during seizure evaluation and then asked them to form and retrieve memories of unrelated pairs of words, such as ‘dog’ and ‘lime.’

They found that  during memory formation, brain activity became more disorganized in the frontal lobe, an area involved in 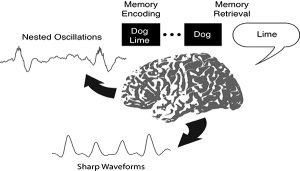 A graphical abstract from Alex’s paper.

executive control and attention, and in the temporal lobe, an area more implicated in memory and language.

“We think this study, and others like it, provide a good starting point for understanding possible treatments for memory disorders,” Vaz said. “The aging American population will be facing major neurocognitive disorders such as Alzheimer’s disease and vascular dementia and will be demanding more medical attention.”