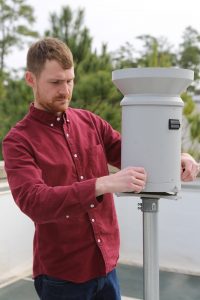 Jonathan Holt replaces the protective cover over the rain gauge.

On Friday night, while most of North Carolina braced against the biting sleet and snow with hot cocoa and Netflix, a suite of research instruments stood tall above Duke’s campus, quietly gathering data on the the storm.

The instruments are part of a new miniature cloud and precipitation-monitoring laboratory installed on the roof of Fitzpatrick CIEMAS by graduate student Jonathan Holt and fellow climate researchers in Ana Barros’s lab.

The team got the instruments up and running in early October, just in time for their rain gauge to register a whooping six inches of rain in six hours at the height of Hurricane Matthew — an accumulation rate comparable to that of Hurricane Katrina when it made landfall in Mississippi. Last weekend, they collected similar data on the winter storm, their Micro Rain Radar tracking the rate of snowfall throughout the night.

The rooftop is just the latest location where the Barros group is gathering precipitation data, joining sites in the Great Smokies, the Central Andes of Peru, and Southern Africa. These three instruments, with a fourth added in early January, are designed to continuously track the precipitation rate, the size and shape of raindrops or snow flakes – which climatologists collectively dub hydrometeors — and the formation and height of clouds in the air above Duke.

Ana Barros, a professor of civil and environmental engineering at Duke, says that her team uses these field observations, combined with atmospheric data from institutions like NOAA and NASA, to study how microscopic particles of dust, smoke, or other materials in the air called aerosols interact with water vapor to form clouds and precipitation. Understanding these interactions is a key prerequisite to building accurate weather and climate models.

“What we are trying to do here is to actually follow the lifecycle of water droplets in the air, and understand how that varies depending on weather systems, on conditions, on the climatic region and the location on the landscape,” Barros said. 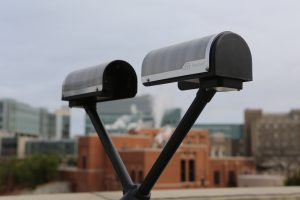 A laser beam passing between the two heads of the distrometer detects the numbers and sizes of passing raindrops or snowflakes.

Besides tracking dramatic events like Matthew, Barros says they are also interested in gathering data on light rainfall, defined as precipitation at a rate of less than 3 mm of an hour, throughout the year. Light rainfall is a significant source of water in the region, comprising about 35 percent of the annual rainfall. Studies have shown that it is particularly prone to climate change because even modest bumps in temperature can cause these small water droplets to evaporate back to gas.

Eliminating this water source, “is not a dramatic change,” Barros said. “But it is one of those very important changes that has implications for how we manage water, how we use water, how we design infrastructure, how we have to actually plan for the future.”

Barros says she is unaware of any similar instrument suites in North Carolina, putting their rooftop site in position to provide unique insights about the region’s climate. And unlike their mountainous field sites, instruments on the roof are less prone to being co-opted by itchy bears.

“When we can gather long term rain gauge data like this, that puts our research group in a really unique position to come up with results that no one else has, and to draw conclusions about climate change that no one else can,” Holt said. “It is fun to have a truly unique perspective into the meteorology, hydrology and weather in this place.” 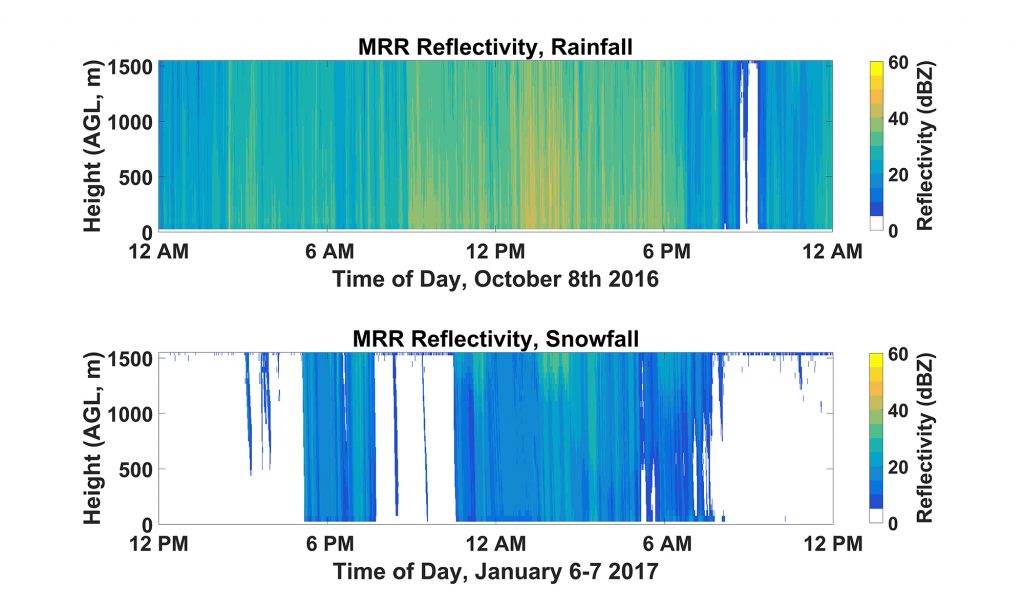 The Micro Rain Radar (MRR) shoots radio waves into the sky where they reflect off water droplets or snowflakes, revealing the size and height of clouds or precipitation. The team collected continuous MRR data during Hurricane Matthew (top) and last Friday’s snow storm (bottom), creating these colorful plots that illustrate precipitation rates during the storms.