As we’ve seen many times, when complex scientific problems like stem cells, alternative energy or mental illness meet the policy world, things can get a little messy. Scientists generally don’t know much about law and policy, and very few policymakers are conversant with the specialized dialects of the sciences. 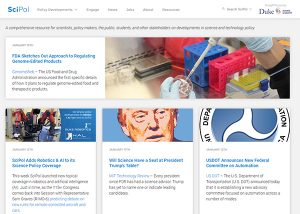 Add the recent rapid emergence of autonomous vehicles, artificial intelligence and gene editing, and you can see things aren’t going to get any easier!

To try to help, Duke’s Science and Society initiative has launched an ambitious policy analysis group called SciPol that hopes to offer great insights into the intersection of scientific knowledge and policymaking. Their goal is to be a key source of non-biased, high-quality information for policymakers, academics, commercial interests, nonprofits and journalists.

“We’re really hoping to bridge the gap and make science and policy accessible,” said Andrew Pericak, a contributor and editor of the service who has a 2016 masters in environmental management from the Nicholas School.

The program also will serve as a practical training ground for students who aspire to live and work in that rarefied space between two realms, and will provide them with published work to help them land internships and jobs, said SciPol director Aubrey Incorvaia, a 2009 masters graduate of the Sanford School of Public Policy. 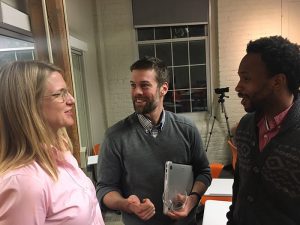 SciPol launched quietly in the fall with a collection of policy development briefs focused on neuroscience, genetics and genomics. Robotics and artificial intelligence coverage began at the start of January. Nanotechnology will launch later this semester and preparations are being made for energy to come online later in the year. Nearly all topics are led by a PhD in that field.

“This might be a different type of writing than you’re used to!” Pericak told a meeting of prospective undergraduate and graduate student authors at an orientation session last week.

Some courses will be making SciPol brief writing a part of their requirements, including law professor Jeff Ward’s section on the frontier of robotics law and ethics. “We’re doing a big technology push in the law school, and this is a part of it,” Ward said.

Because the research and writing is a learning exercise, briefs are published only after a rigorous process of review and editing.

To keep up with the latest developments, the SciPol staff maintains searches on WestLaw, the Federal Register and other sources to see where science policy is happening. “But we are probably missing some things, just because the government does so much,” Pericak said.