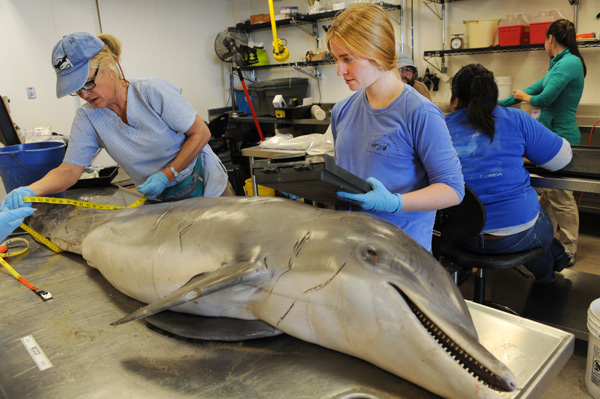 Guest Post by Samantha Emmert, a Biology and Evolutionary Anthropology undergraduate at the Duke Marine Lab

The rolling sand dunes and gentle waves of Emerald Isle are so picturesque that I almost forget why I am there: to conduct a necropsy (autopsy on a non-human) on a stranded bottlenose dolphin. Vicky and I have been searching for the animal for about an hour now, driving up and down the beach. Suddenly, I catch a whiff of rotting flesh. Great! We’ve found it!

During my year at the Duke Marine Lab, I am volunteering for the North Carolina Central Coast Marine Mammal Stranding Network. This is no normal year for the network and others like it on the east coast. In the last seven months, 1081 bottlenose dolphins have stranded between New York and Florida. This magnitude of strandings is almost ten times the average, and has therefore been declared an “Unusual Mortality Event” by the National Oceanic and Atmospheric Administration. The cause of these deaths? Morbillivirus, the disease family that includes human measles.

For Independent Study credit I have been collecting data about the stranded dolphins and comparing them to data from 1987-88, the last and only other time there was a morbillivirus Unusual Mortality Event affecting bottlenose dolphins. I have found that this event is following the patterns of 87-88 almost exactly, particularly in terms of the sex and age of dolphins, and when and where they are stranding. These patterns may be a strong indicator for the path of future events.

Dolphin strandings in the area are reported to Dr. Vicky Thayer, the network’s coordinator and a Duke alumna (M.E.M. 1982, Ph.D. 2008). Vicky then calls her volunteers, such as myself, to assist in a response. Today, the dolphin was freshly dead and in good shape for a full necropsy. As Vicky assesses the dolphin for signs of human interaction, I sharpen knives and prepare vials to hold tissue samples. I put on my boots, coveralls, and gloves (things are about to get bloody). Together, Vicky and I peel back blubber and slice through flesh in order to reach the organs that are most impacted by morbillivirus: the lungs, associated lymph nodes, and spinal cord.

This Unusual Mortality Event is not the only problem that the network has been facing this year. Their federal funding for the upcoming year was not renewed.

Many marine mammal rescue networks, such as this one, rely on the John H. Prescott Marine Mammal Rescue Assistance Grant Program, established under amendments to the Marine Mammal Protection Act. However, the number of networks that received awards declined from 39 in 2012 to 12 in 2013. Only two of those 2013 recipients are in the geographic range affected by the dolphin mortality, compared to 13 in 2012. Particularly during a time when they are busiest, the loss of funding has been a huge stress for the networks. 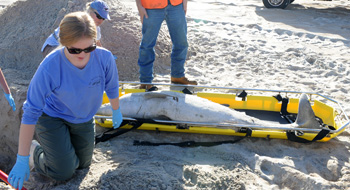 Samantha and Vicky got to this dolphin just before town workers buried it on the beach and were able to get their tissue samples.

Throughout the necropsy, several fishermen stop by to ask what we are doing. They’ve been fishing on this beach for decades and are aware of the increased occurrence of strandings in the area. It is vital to us that they understand the importance of reporting stranded animals.

“As top predators in coastal waters, these animals are sentinels of ocean health. When they wash ashore in unprecedented numbers, we should direct our attention and funding to learn as much as we can about the cause,” Vicky explains while taking apart the carcass.

We reach the lungs and, sure enough, they are discolored and covered in lesions. We cut chunks from the lung, lung lymph node, and spinal cord and I squish them into small vials. They will be sent to a lab in California to be tested for morbillivirus. The data we record and samples we take will be useful for the many researchers interested in this event across the nation.

It is hard to say what will become of the NC Central Coast Marine Mammal Stranding Network and others like it. Without renewed funding in the 2014 year, Vicky will be unable to continue the network and stranding response will stop in this area. Valuable data for long-term research on stranded animals will be lost. Live-stranded animals will die on beaches unaided. In order to protect and conserve these beloved species, the Prescott Grant and other funding sources must be made more readily available.

Beers with Bob — Without Beer