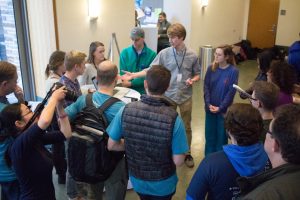 These bright students from around Durham (mostly from Duke) competed in teams to create something that would positively impact the environment. The projects were judged for applicability, daringness, and feasibility, among other things. During the Project Expo, all teams briefly presented to viewers like a school science fair. 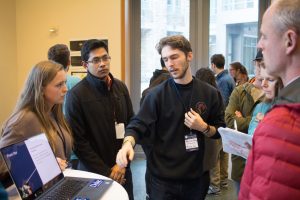 One of the projects I liked a lot was called Entropy—a website with your own personal plant (I named mine “Pete”) that grows or dies depending on your sustainable actions throughout the day. The user answers simple yes or no questions, such as, “did you turn off the lights today?”

You can also complete daily goals to get accessories like a hat or mustache for your plant. The website connects to Facebook, so you can track your friends’ progress and see how green they’re living. Ultimately it’s just a good, fun way to keep your sustainability in check. Pete was looking super-cute after I spammed the yes button.

Another interesting innovation posed a solution to the difficulty of catching lion fish. Humans are a lion fish’s only predator, and we hunt them by spear fishing. Since lion fish are highly invasive, catching them en-masse could seriously benefit the biodiversity of the ocean (plus, they taste delicious). So one team came up with a canopy like contraption that attracts lion fish to hang out underneath it, and then snatches them all up at once like a net. Pretty neat idea, and if it was implemented on a large scale could be a huge benefit to the Earth’s oceans (and restaurants)!

After the expo, the top seven teams were selected and given three minutes to present to the judges and audience as a whole. 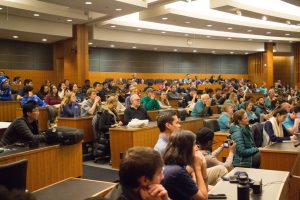 Every project was astounding. “Collide-o-scope” came up with a simple Arduino-based device to transmit elephant seismic activity to train drivers nearby in order to reduce the number of train-elephant collisions in India and Sri Lanka — currently a huge problem, for both us as humans and the elephant population.

Another team, “Manatee Marker,” proposed a system of solar powered buoys to detect manatees, with the hope of reducing frequent manatee-boat accidents. Considering that manatees are quiet, basically camouflaged, and thermally invisible, this was quite an ingenious task. 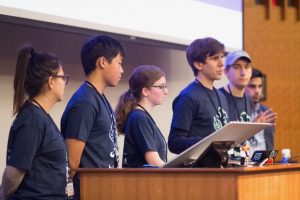 Perhaps my favorite project, “Algenie” stole the show. Methane gas is a huge factor to global warming — around twenty-five times more potent as a heat-trapping gas than Carbon Dioxide — and a lot of it comes from cow farts. However, we’ve recently discovered that putting seaweed in cow feed actually lowers methane emissions almost entirely! So this team came up with a vertical, three-dimensional way to grow algae — opposed to “two-dimensionally” growing across a pond — that would maximize production. Global warming is obviously a massive issue right now and Algenie is looking to change that. They ended up getting first place, and winning a prize of $1,000 along with GoPros for every team member. 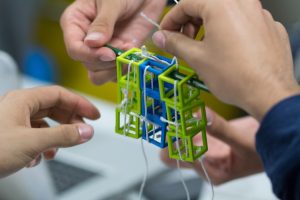 At the end of the day, it wasn’t about the prize money. The competition was meant to generate creative and practical ideas, while promoting making a difference. After  attending the expo I felt more aware of all the environmental issues and influenced to help out. Even if you don’t feel like spending the time drafting up a crazy buoy manatee-detecting system, you can still do your part by living sustainably day to day.

Blueprint has done an awesome job of spurring young, enthusiastic students towards helping this planet — one cow fart at a time.

How A Zebrafish’s Squiggly Cartilage Transforms into a Strong Spine