“Trion” may sound like the name of one of the theoretical particles blamed for mucking up operations aboard the Starship Enterprise.

But believe it or not, trions are real — and they may soon play a key role in electronic devices. Duke researchers have for the first time pinned down some of the behaviors of these one-of-a-kind particles, a first step towards putting them to work in electronics. 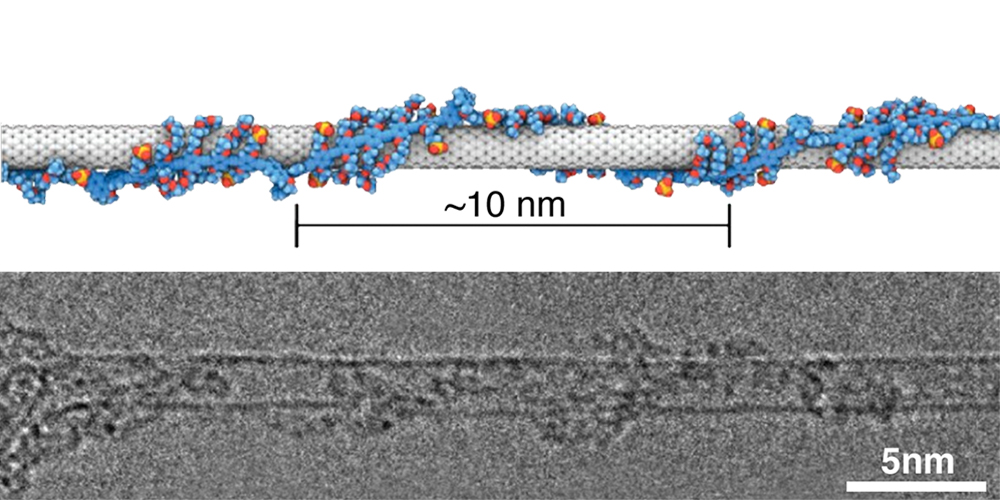 Trions are what scientists call “quasiparticles,” bundles of energy, electric charge and spin that zoom around inside semiconductors.

“Trions display unique properties that you won’t be able to find in conventional particles like electrons, holes (positive charges) and excitons (electron-hole pairs that are formed when light interacts with certain materials),” said Yusong Bai, a postdoctoral scholar in the chemistry department at Duke. “Because of their unique properties, trions could be used in new electronics such as photovoltaics, photodetectors, or in spintronics.”

Usually these properties – energy, charge and spin – are carried by separate particles. For example, excitons carry the light energy that powers solar cells, and electrons or holes carry the electric charge that drives electronic devices. But trions are essentially three-in-one particles, combining these elements together into a single entity – hence the “tri” in trion. 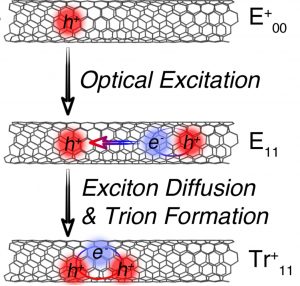 A trion is born when a particle called a polaron (top) marries an exciton (middle). Credit: Yusong Bai.

“A trion is this hybrid that involves a charge marrying an exciton to become a uniquely distinct particle,” said Michael Therien, the William R. Kenan, Jr. Professor of Chemistry at Duke. “And the reason why people are excited about trions is because they are a new way to manipulate spin, charge, and the energy of absorbed light, all simultaneously.”

Until recently, scientists hadn’t given trions much attention because they could only be found in semiconductors at extremely low temperatures – around 2 Kelvin, or -271 Celcius. A few years ago, researchers observed trions in carbon nanotubes at room temperature, opening up the potential to use them in real electronic devices.

Bai used a laser probing technique to study how trions behave in carefully engineered and highly uniform carbon nanotubes. He examined basic properties including how they are formed, how fast they move and how long they live.

He was surprised to find that under certain conditions, these unusual particles were actually quite easy to create and control.

“We found these particles are very stable in materials like carbon nanotubes, which can be used in a new generation of electronics,” Bai said. “This study is the first step in understanding how we might take advantage of their unique properties.”

The team published their results Jan. 8 in the Proceedings of the National Academy of Sciences.