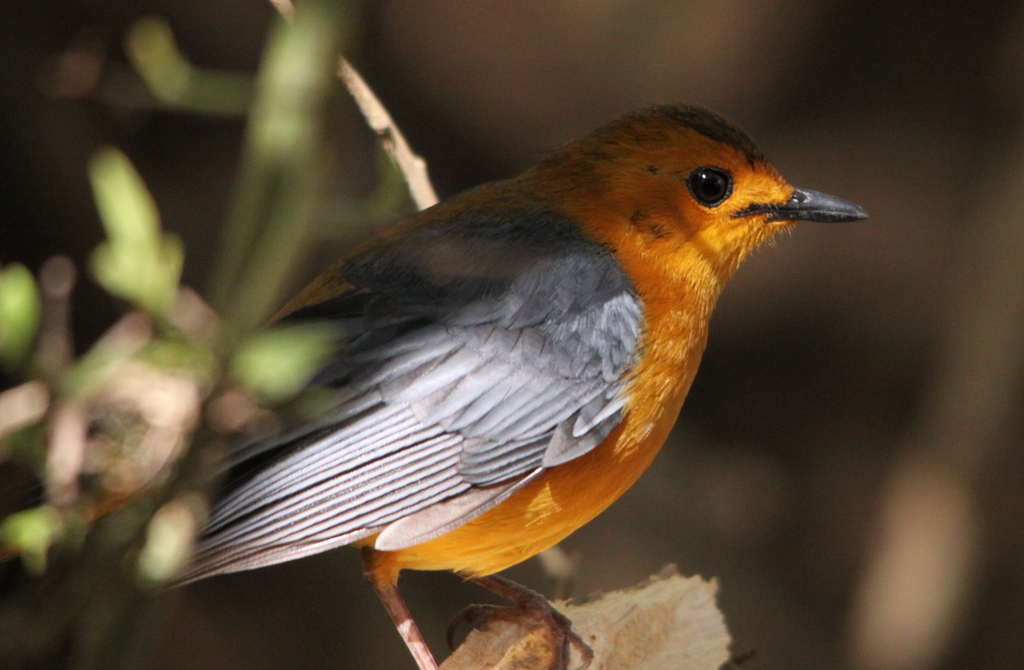 The red-capped robin-chat (Cossypha natalensis) can mimic the songs and calls of dozens of other bird species – even their duets, says Duke researcher Tom Struhsaker.

Singing a duet in a foreign language isn’t just for opera stars — red-capped robin-chats do it too. These orange-brown birds with grey wings can imitate the sounds of 40 other bird species, even other species’ high-speed duets.

The latter finding comes from Tom Struhsaker, adjunct professor of evolutionary anthropology at Duke. Struhsaker didn’t set out to study robin-chats. His interest in their vocal abilities developed while studying monkeys in Kibale Forest in Uganda, where he lived for nearly two decades from 1970 to 1988.

Their typical song “sounds like a long, rambling human-like whistle,” Struhsaker said. But during the 18 years he spent studying and living in Kibale, Struhsaker also heard these birds impersonate the tambourine-like courtship call of the crested guineafowl, the crow of a rooster, and the “puweepuweepuwee” of a crowned eagle, among others.

“The robin-chat’s ability to imitate is so good that many a bird watcher has looked skyward vainly searching for a crowned eagle performing its aerial display, when in fact the source of the eagle’s undulating whistle was a robin-chat in the nearby understory,” Struhsaker said.

He also noticed that if he whistled, eavesdropping robin-chats would approach and call back, and if he tweaked the pitch and sequence of notes in his whistle, the birds sometimes changed their reply.

This suggests red-capped robin-chats may be lifelong learners, unlike many other bird species that only learn songs during critical time windows, Struhsaker said.

But the robin-chat doesn’t stop at mimicking others’ solo performances. Notably, Struhsaker also heard them imitate the duet of the black-faced rufous warbler.

Black-faced rufous warblers sing a rapid-fire “seee-oooo-ee” duet with their mates. The two birds take turns such that the male sings the “seee,” the female chimes in with the “oooo” and the male fires back with the final “ee,” with no pauses between the three notes. The partners sing back and forth so seamlessly that they are often mistaken for a single bird.

“In order to do this, birds have an incredibly rapid reaction time, much greater than that of humans,” Struhsaker said.

“This suggests these birds have an unusually high level of auditory perception and reaction time and cognitive ability,” Struhsaker said.

Some Lemurs are Loners, Others Crave Connection