Panic in the Poster Session!

For their recent retreat, Regeneration Next tried something a little different for the time-honored poster session.

Rather than simply un-tubing that poster they took to the American Association of Whatever a few months ago, presenters were asked to DRAW their poster fresh and hot on a plain sheet of white paper in 15 minutes, using nothing more than an idea and a couple of markers.

Concerns were shared, shall we say, with the leadership of the regenerative medicine initiative when the rules were announced.

“People are always nervous about something they haven’t tried before,” said Regeneration Next Executive Director Sharlini Sankaran. “There was a lot of anxiety about the new format and how they would explain their research without charts and graphs.”

There was palpable poster panic as the retreat moved to the wide open fifth floor of the Trent Semans Center in the late afternoon. Administrative coordinator Tiffany Casey had spread out a rainbow of brand-new sharpies and the moveable bulletin boards stood in neat, numbered ranks with plain white sheets of giant post-it paper.

After some nervous laughter and a few attempts at color-swapping, the trainees and junior faculty got down to drawing their science on the wobbly tackboards.

And then, it worked! It totally worked. “I think I saw a lot more interactivity and conversation,” Sankaran said. 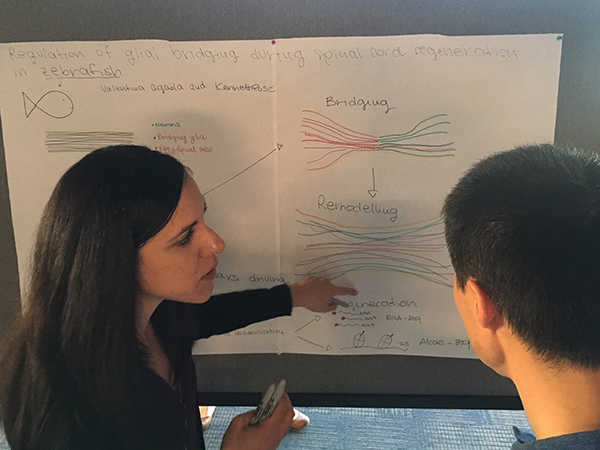 A fist-full of colorful sharpies gave Valentina Cigliola a colorful launching point for some good conversations about spinal cord repair, rather than just standing there mutely while visitors read and read and read. 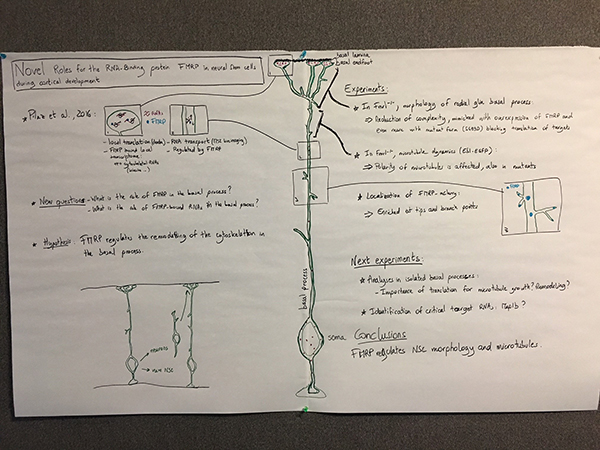 Louis-Jan Pilaz used the entire height of the giant post-it notes to draw a beautifully detailed neuron, with labeled parts explaining how the RNA-binding protein FMRP does some neat tricks during development of the cortex. 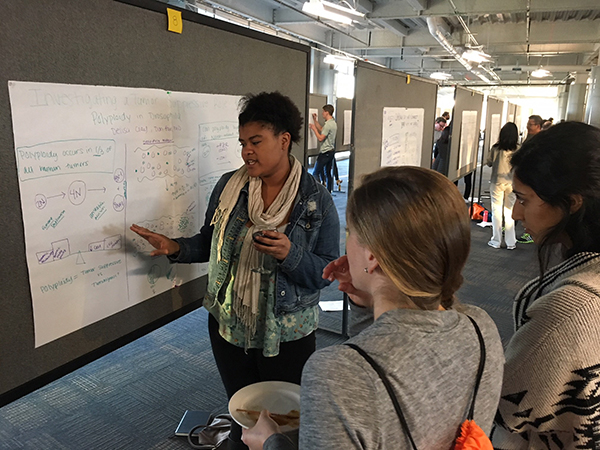 Delisa Clay’s schematics of fruitfly cells having too many chromosomes made it easier to explain. Well, that and maybe a glass of wine. 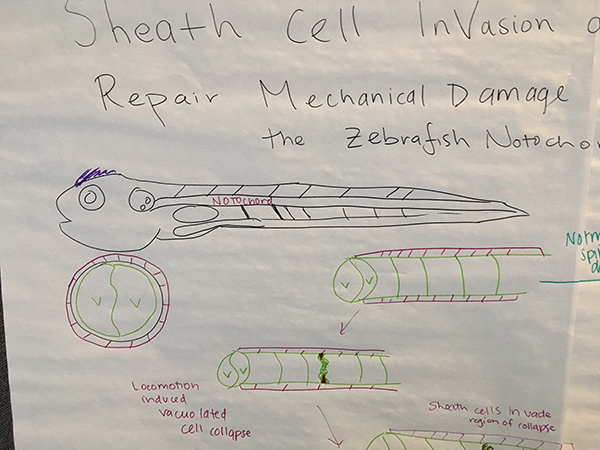 Jamie Garcia used her cell-by-cell familiarity with the zebrafish to make a bold, clear illustration of notochord development and the fish’s amazing powers of self-repair. 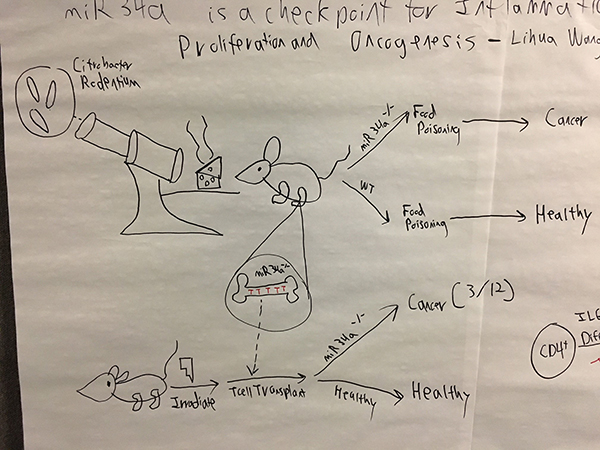 Don’t you think Lihua Wang’s schematic of experimental results is so much more clear than a bunch of panels of tiny text and bar charts?

In the post-retreat survey, Sankaran said people either absolutely loved the draw-your-poster or hated it, but the Love group was much larger.

“Those who hated it felt they couldn’t represent data accurately with hand-drawn charts and graphs,” Sankaran said. “Or that their artistic skills were ‘being judged’.”

A few folks also pointed out that the drawing approach might work against people with a disability of some sort – a concern Sankaran said they will try to address next time.

There WILL be a next time, she added. “I had a few trainees come up to me to say they weren’t sure how it was going to go, but then they said they had fun!” 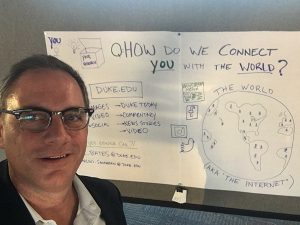 Post and pix by Karl Leif Bates, whose hand-drawn poster on working with the news office contained no data and was largely ignored.