Edison, NJ is just 40 miles from Manhattan and 70 miles from Philadelphia. It’s also home to the US EPA’s Emergency Response Team (ERT), where I spent the summer as an intern. 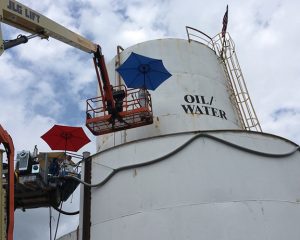 Stella Wang and an EPA contractor used lifts to test oil being pumped out of these huge tanks. It was found to be contaminated with mercury, benzene and lead.

At the start of my internship, I had little idea of how ERT functioned. Unlike the 10 regional offices of the Environmental Protection Agency, ERT is a “headquarters” or Washington, DC-based group, which means it responds to incidents all over the country such as oil spills, train derailments, and natural disasters.

For example, my mentor, an air specialist who generally works from his cubicle in Edison, aided in the immediate aftermath of Hurricane Katrina by employing equipment to analyze air for hazardous pollutants. Other ERT team members have conducted sediment sampling to expedite the hazardous waste removal process, given consultation advice to other EPA members for long-term remedial site work, and led the innovation of new technology.

I was able to shadow and help my mentor and fellow ERT members with their Superfund site removal work. I created accurate maps showing injection well locations, learned how to use air monitoring instruments, and helped perform chemical lab experiments that will be employed for future site analysis.

Perhaps my favorite part of the internship was traveling to a myriad of active sites. At these sites, I not only got to see how ERT members worked with EPA’s on-scene coordinators, but also observed the physical removal and remediation processes. I was fortunate to visit a particular site multiple times — I witnessed the removal of contaminated oil from an abandoned lot as the summer progressed. 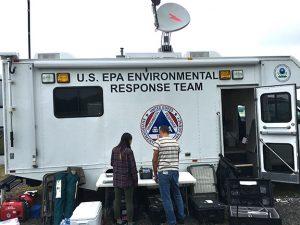 At another site, I saw the beginning of an injection process intended to prevent the contamination of underground drinking water by hexavalent chromium. By pumping sodium lactate into underground wells, the hexavalent is converted into the insoluble and benign chromium-3 ion. If the injection process works, the community will no longer be threatened by this particular hazardous material.

ERT also acts in anticipation of possible contamination to protect the public. At largely attended events like the Democratic National Convention, a few ERT members will arrive with monitoring equipment. They pride themselves in their real-time data collection for a reason: throughout the event, they can detect whether a contaminant has been released and immediately instigate an emergency response to protect attendees.

Thanks to various ERT members, I felt accepted and welcome. They were open and patient with my never-ending questions about their career paths and other things. They’ve graciously taken me out to lunch so that they could get to know me better, ensuring my inclusion in their small community.

Of course, the experiences I had this summer, while brief, have taught me a tremendous amount and I have a clearer sense of how this division of the US federal government functions. But, it would be inaccurate and unjust to omit the impact that its people made on me.