It’s 6 p.m. on a Wednesday and the grad students aren’t at their lab benches. IM softball doesn’t start till next week, what gives?

We’ve snuck out of our labs a bit early to take in a dose of U.S. policy for the evening.

Politics fall far outside our normal areas of expertise. I’m a biology Ph.D. student studying plants — even with my liberal arts education, politics isn’t my bread and butter. 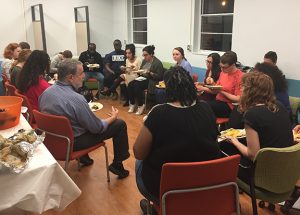 But the current political climate in the U.S. has many scientists taking a more careful look into politics. Being scholars who have a sense of the world around us has become more important than ever.

Weber, a budding “sci-pol” enthusiast and the general programming chair for the student group INSPIRE, feels passionately about getting scientists informed about policy.

So she organized this event for graduate scientists to talk with the deputy director of Duke Science & Society, Buz Waitzkin, who previously served as special counsel to President Bill Clinton, and now teaches science policy classes cross-listed between Duke’s Biomedical Science programs and the Law School.

Seated with food and drinks—the way to any grad student’s heart—we found ourselves settling in for an open discussion about the current administration and the impact its policies could have on science.

We covered a lot of ground in our 2-hour discussion, though there was plenty more we would love to continue learning.

We discussed: lobbying, executive orders, the balances of power, historical context, tradition, and civil actions, to name a few.

There were a lot of questions, and a lot of things we didn’t know.

Even things as simple as “what exactly is a regulation?” needed to be cleared up. We’ve got our own definition in a biological context, but regulation takes on a whole new meaning in a political one. It was neat having the chance to approach this topic from the place of a beginner.

We were floored by some of the things we learned, and puzzled by others. Importantly, we found some interesting places of kinship between science and policy.

When we discussed the Congressional Review Act, which impacts regulations—the main way science policy is implemented—we learned there is ambiguity in law just like there is in science.

One area on all of our minds was how we fit into the picture. Where can our efforts and knowledge as scientists and students can make a difference?

I was shocked to learn of the lack of scientists in government: only five ever in Congress, and three in the Cabinet.

But luckily, there is space for us as science advisors in different affiliations with the government. There are even Duke graduate students working on a grant to develop science policy fellowships in the NC state legislature.

At the end of the night, we were all eager to learn more and encouraged to participate in politics in the ways that we can. We want to be well-versed in policy and take on an active role to bring about change in our communities and beyond.