We often view climate change and air pollution as two separate entities. But, the two issues are united by one common driving factor: human emissions. Nicholas School of the Environment Earth Sciences Professor Drew Shindell reminds us how interconnected these issues truly are, and how we must begin viewing them as such to create change.

Shindell argues that climate change and air pollution are often misrepresented. Air pollution is a problem that seems elusive to the individual, and yet it is the 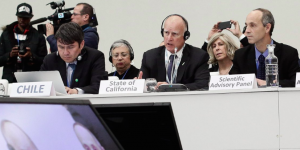 Dr. Shindell with Marcelo Mena (far left), Vice Minister of the Environment of Chile, and Governor Jerry Brown (CA) at the COP21 in Paris.

number one cause of premature death. The problem is often polarized from us, and we forget that we are largely at fault for its increasing effect. We place the blame on the emissions of large corporations, when our own car emissions are just as detrimental. Shindell argues that it is the “othering” of these issues that makes it hard for us feel a need to create change.

But, by clearly linking climate change and air pollution together, and linking those two to human health, Shindell believes we will develop a greater sense of responsibility for our environment. He gives the example of Pakistan, where increased ozone levels due to human emissions have severely decreased the air quality. As a result, there has been a 36% decline wheat and rice production. This dent in Pakistan’s agricultural systems poses a great threat on food security for the entire nation, and could potentially create a wave of health issues.

But policy often blurs the line between air pollution, climate change and human health. Shindell says he doesn’t know of a single jurisdiction that explicitly mentions the scope of negative effects air pollution and climate change can have on our health (stroke, lung cancer, new disease vectors, to name a few). He suggests expanding our metrics and developing a broader-based impact analysis so that humans are well-informed of the interconnectedness of these issues. 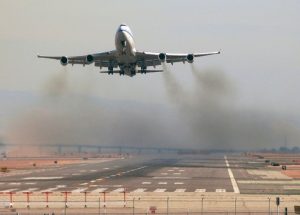 Is it easier to blame a big factory for pollution than to look at your own travel habits?

If we included public health in our impact estimates for methane emissions, for example, the cost would be much larger than anticipated. But, Shindell highlights that to bring these emissions down requires a change that is not easy to ask of our energy-dependent, consumer-driven world. Decreasing our meat consumption by 48%, for example, would save us billions of dollars, but to trigger such a change would demand a desire from the public to alter their behavior, which time and time again has proven to be challenging.

At the end of the day, this scientific issue is a largely psychological one. We assume our contributions make a negligible difference, when in reality it is our consumer behavior that will drive the change we wish to see in our environment. But, how are we expected to feel the burden of air pollution on our health, when policy isn’t directly linking the two together? How can we see climate change as an issue that threatens the security of global agricultural systems when legislation fails to draw the two together explicitly? It is here where we must see a change.