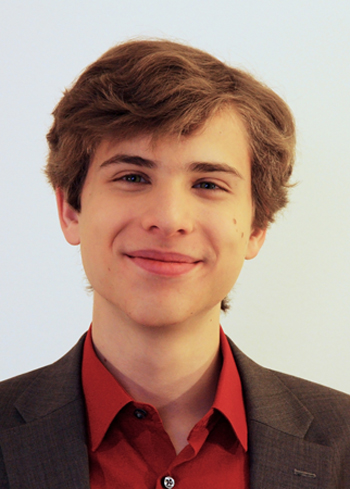 Alec Arshavsky, 17, of East Chapel Hill High School is being recognized for his project “Automatic Characterization of Donor Tissue for Corneal Transplantation Surgery.”

Arshavsky worked in the Duke lab of assistant professor of ophthalmology and biomedical engineering Sina Farsiu, developing an algorithm that automates the process of making precise measurements of a donor cornea for transplant. These measurements are currently being done laboriously by hand, and they ensure that the donor eye is healthy and will be compatible with a recipient’s anatomy and not change their vision too much.

Arshavsky spent two years working on his project, first learning the mathematical framework of image processing and then applying it to automate the process of analyzing corneal images from optical coherence tomography. His algorithm is currently being used in clinical trials. Arshavsky said he will pursue engineering in college but hasn’t chosen his school yet. Alec’s dad, Vadim Arshavsky, is a professor of ophthalmology and pharmacology at Duke.

Parth Thakker recently displayed a poster of his Duke research.

Parth Thakker, 17, of the North Carolina School of Science and Mathematics in Durham, did his work, “Design, Assembly, and Optimization of Novel ZnxSeAgy Biocompatible Quantum Dot Sensitized Solar Cells” in the lab of Nico Hotz, an assistant professor of Mechanical Engineering and Materials Science at Duke.

The Hotz group has been working on quantum dots for solar collection that don’t rely on toxic cadmium and lead, making them safe for skin contact. Thakker, who’s from Charlotte, said there might be an application for a wearable device like Google Glass that would benefit from a little safe solar power.

Thakker worked on his project over three months last summer, making some winning suggestions about counter-electrodes and new ways of depositing quantum dots on a substrate, “but it’s very much a group project,” he said. Thakker, who is also the student body president at NCSSM, will be headed to Harvard in the Fall, possibly to study chemistry. (He also gives a pretty good TV interview.)

March 6-12, Arshavsky, Thakker and the other 38 finalists will travel to Washington, D.C. for a week-long event to pick the Intel Science Talent Search winners. They’ll undergo a rigorous judging process not only on their own work, but also covering general problem-solving and scientific knowledge. “They want to see how you think,” Arshavsky said. The students will also get a chance to interact with leading scientists and national leaders and will display their research for the public at the National Geographic Society.

The top 10 winners will be announced at a black-tie, invite-only gala awards ceremony at the National Building Museum on March 11, 2014.

Alec presenting his work at the 2013 Annual meeting of the Association for Research in Vision and Ophthalmology in Seattle.

The prestigious contest awards $630,000 in prizes this year, with the first-place winner receiving $100,000 from the Intel Foundation. Many past winners have gone on to achieve great things, including eight Nobel Prizes, two Fields Medals, five National Medals of Science, 11 MacArthur Foundation Fellowships and an Academy Award for Best Actress (that would be Natalie Portman).

The following week, Arshavsky will be off to Beijing to present his work again, this time one of four students selected as winners of the North Carolina International Science Challenge.

Why Cute Babies are a Cognitive Illusion