The bubbling of reactions and the sight of stern-looking, goggle-wearing scientists with lab coats on the verge of discovering the next big cure is what goes on in Duke’s biology labs, right? No, not at all.

Besides seeing lab coats and a variety of beakers, one might be surprised to also find people in hoodies or khaki shorts and sneakers listening to their favorite songs and joking with each other. 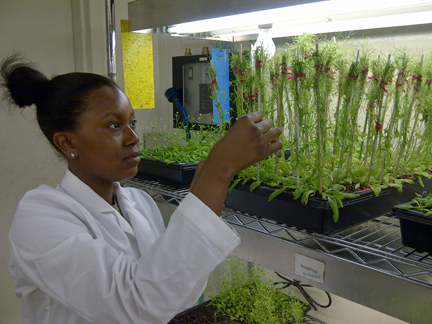 Morgan Morrison has been working with the plant Arabidopsis thaliana in the lab of Xinnian Dong in Duke Biology.

Don’t be fooled by the relaxed environment however. These graduate and undergraduate students are  hard at work, including intern Morgan Morrison, a North Carolina Central University senior from Charlotte interning at Duke’s Institute of Genome Sciences & Policy (IGSP) Summer Fellowship Program.  Morrison and her colleagues spend their days transferring samples into geno-grinders (machines that grind plant tissue), carefully extracting chemicals with pipettes, and handling subzero nitrogen which sizzles and hisses  loudly as samples are lowered into it..

Morrison was accepted into other summer internships but chose Duke’s because of her interest in genomics and her attraction to the university.

This internship is offered to a select few students from around the nation to take on various projects. Morrison is undergoing two projects, observing plant-microbe interactions and cloning plants to study their transcription of genes.

“I’m observing the microbes (microscopic organisms) to find useful plant-derived compounds for combatting infections,” says Morrison. “I’m cloning plants to see how resistant they are to a given disease.”

Morrison is doing molecular cloning, which is different from making genetically identical copies like cloning in the movies. Molecular cloning is the engineering of transgenic plants, which are plants containing genes transferred from another species. The plant she works with is  Arabidopsis, a small flowering plant that’s a member of the mustard family.

To perform molecular cloning, she first identifies a protein of interest (POI) that might confer resistance to the Arabidopsis and then through a series of steps inserts the DNA coding sequence  of that POI into the DNA of Arabidopsis. Then she conducts experiments test whether the new protein conferred resistance.

Morrison developed a fascination with scientific research after an AP Biology II course where she worked with Drosophila (fruit flies).

“At the time, I didn’t know which field of science would be best for me, but I especially wanted to be involved in chemistry.”

She’s pursuing a B.S. in Pharmaceutical Science at NC Central University with a concentration in Chemistry, followed by going into a Ph.D program. “Right now, my purpose here at this Duke internship is to determine if I want to do research, and if so, what I’d like to research,” she says.

So far, she finds the internship beneficial and plans to combine her new knowledge with her future plans, which includes going to pharmacy school or becoming a patent lawyer. “As a scientist, I feel that it is good to be well-rounded in every aspect of science, via biology, chemistry, or desk work because basic skills and information are always relevant wherever you go,” she says.

Congo native Musoki Mwimba is mentoring Morrison during the internship. He’s an N.C Central University alumnus and graduate student in Duke’s Department of Biology. His interest is pharmaceutical science and part of his training and pursuit of a doctorate is mentoring newcomers. He says this requirement helps “improve his communication skills with others.”

“Though I like working by myself, working with the mentees is great because I’m learning from them,” Mwimba says. “As I see what their aspirations are, I try to help them reach them.”

As she works alongside Mwimba, Morrison wants to absorb as much as she can from this experience. “I hope to gain better understanding of what people do in this lab and master the projects I’m working on,” she says. “I’m happy I chose to come here.”

Lemurs Most Threatened Mammals on the Planet