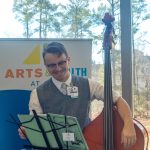 When William Dawson took over the Performing Arts program at Duke Hospital, he became the first full-time staff Musician in Residence and Semans/Byrd Performing Arts Coordinator. As a teacher, band director and international performer, Dawson understood the effect music could have on one’s mood and emotions. Still, he had a challenging task ahead of him – Dawson had to prove that music could make an impact in a hospital setting.

In the spring of 2014, as part of the larger Arts & Health program at Duke Hospital, the department administered a survey. Staff had the opportunity to reflect on what programs had improved their hospital experience. As it turned out, live music was one of the top patient satisfiers. Armed with the information, Arts & Health chose to expand the Performing Arts program.

The Performing Arts program differs from music therapy, where board certified professionals work one-on-one or in small groups to achieve a personalized goal. Instead, it is composed of Artists in Residence, Performing Arts Volunteers and Hospital Concerts. Throughout the week, professional musicians are assigned to hospital units to visit patients at the bedside. The professional musicians play for relaxation, company, religious services, and special events including birthdays, weddings, anniversaries and the final moments of life.

Performing Arts Volunteers are students and community members who perform in hospital lobbies and concourses. To assess the musicians’ audience, Dawson used a handheld tally counter and noted that on average, 600-800 people pass through the hospital’s heavily trafficked areas per hour. The instrumental music provides an opportunity for a shared connection, he said.

“It’s like a magic trick,” Dawson said. “I can’t tell you how many times I’ve been playing there piano and a person has cried. It’s beautiful – it’s a reminder that there’s life.”

Hospital Concerts are offered periodically by the Artists in Residence and professional organizations. Recognizing the diversity of the hospital staff and patients, Dawson ensures that performers reflect a variety of backgrounds and can cater to a wide audience.

Since becoming coordinator, Dawson has been statistically analyzing the growth of the program, because potential donors and current financial backers would like to see measurable impact. Dawson has the figures: In the 2016-2017 fiscal year, the number of bedside requests increased by 282 percent, from 109 to 416. To match demand, the number of Performing Arts Volunteers increased by 120 percent and 1,156 hours of live music were performed.

In the future, Dawson looks forward to continued program expansion. Additional funding would also enable the Uke in Duke program, a hospital in-patient instructional ukulele program, to expand and serve more patients. With Dawson’s leadership and a dedicated team of professional musicians and volunteers, the Performing Arts program has an undeniable impact.