Aren’t the benches at Duke great? They’re nice structures where you can chill with your friends, eat your Panda Express, get homework done, or maybe even nap. But haven’t you ever been working on a bench outside the Bryan Center around dusk, and it’s getting hard to see those Econ notes? Or cursed under your breath because it’s such a beautiful day outside, but your laptop is about to die? 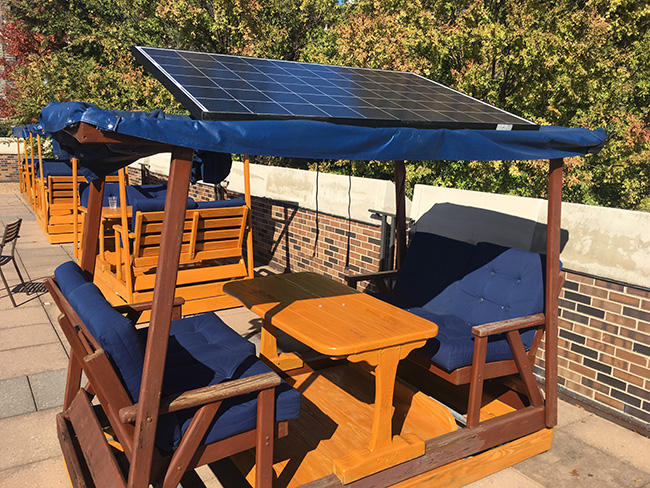 Benches with solar power have been installed in three spots, including the McClendon Bridge.

That’s exactly what inspired Gerry Chen, a Junior here at Duke, to create the “Solar Bench.” With the support of Smart Home and ESG, Gerry adapted an ordinary swinging bench at Duke into one with iPhone chargers and fully controllable LED strip lights. So fear no more! Now you can send all the snaps you want on your phone without worries of draining your battery, or grind out hours of multi homework while watching the sunset. The best part? It’s all solar powered!

November 6-9 was Energy Week, and on Monday mechanical engineer Shomik Verma presented the “Smart Home Demo,” which featured the inception, design, and implementation of the Solar Bench idea (1). The main motive behind the benches is “to increase the vision and awareness of renewable energy around Duke.” In this sense Gerry took something that started off as a cool way to stay outside after dark, and expanded it into a mode of adding renewable energy to Duke’s campus. 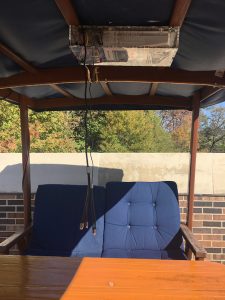 Beneath the canopy is a weatherproof box with a power controller and a bunch of dongles.

These benches are a great addition, especially now that it gets dark at like 5:40 (I mean, come on). Right now there’s three of them—one on the McClendon Bridge, one in the Few Quad, and one at the Smart Home (which you should check out, too—there’s tons of cool stuff there).

It kind of seems like these benches can’t do that much, but keep in mind this is still a relatively new project which started in May. One upgrade that could be happening soon is implementing a way to monitor energy and bench usage. But Gerry’s also got some bigger plans in store. With “Gen 2” he hopes to add more durability, Wifi, laptop chargers, and even motion sensing technology. Now that’s a decked-out bench! There’s more solar benches to come, too. Gerry hopes to make the installation easier and ultimately increase production, especially on East Campus.

Right now, it costs about $950 to make one of these solar benches. Each one has a 250 Watt solar panel sitting on the roof that absorbs energy from the sun and stores it in a big battery at one end of the bench. Underneath the canopy, there’s a thing called a “charge controller” that takes the energy from the sun and battery and distributes it appropriately to the lights and chargers. That’s also where the on / off switch is, as well as knobs to adjust the brightness and color of the lights. On a full charge, the battery can last for four days with no more additional sunlight. Even late in the night, the bench has you covered. 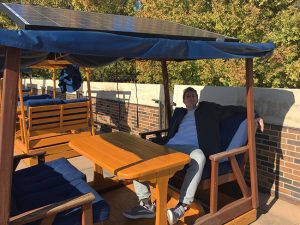 Will demonstrates a proper solar-powered chill.

That’s what’s so cool about solar energy. It almost seems too easy. These benches are saving energy while also using a renewable source. In the process, they’re doing their part to inspire Duke to become a greener campus. In Shomik’s words, this is the sort of technology “that will revolutionize the daily lives of people throughout the world.”

Free, clean energy, that just powers this bad-ass bench nonstop? Who knew a star 93 million miles away could be so useful?!