Research is not always for the faint of heart. 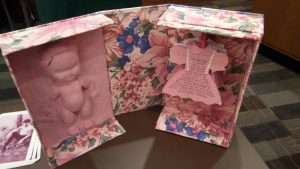 At least, that’s what Rubenstein Library seemed to be saying this Halloween with the fifth installment of its sometimes freaky, always fascinating “Screamfest” exhibition. With everything from centuries-old demonology textbooks, to tarot cards, to Duke-based parapsychology studies, Screamfest V took a dive into the deep end of the research Duke has gathered throughout its long history.

There’s a lot to unpack about this exhibit, but one of the most unsettling parts has to be the 1949 written exchange between Duke parapsychologist Joseph Rhine and Lutheran Reverend Duther Schulze, speaking about a boy they thought could be demonically possessed.

“Now he has visions of the devil and goes into a trance and speaks a strange language,” Duther wrote.

Anything about that sound familiar? If so, that might be because this case was the basis for the 1973 horror classic The Exorcist. (And people say research isn’t cool!)

The Rubenstein also exhibited a pack of cards used by Rhine’s parapsychology lab to test for extrasensory perception. Inscribed with vaguely arcane symbols, one of these “Zener cards” would be flipped over by a researcher behind a screen, and a test subject on the other side would attempt to “sense” what card the researcher displayed. 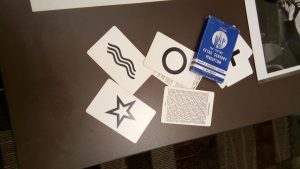 Although the results of this test were never replicated outside of Duke and are today widely considered debunked, Rhine’s research did create a stir in some circles at the time. One of the most interesting things about this exhibit, in fact, was the way it showed how much methods and topics in science have changed over time.

A 1726 publication of the book Sadducismus triumphatus: or, A full and plain evidence concerning witches and apparitions, for example, was loaded with supernatural “research” and “findings” every bit as dense and serious as the title would suggest. The section this tome was opened to bore this subheading: “Proving partly by Holy Scripture, partly by a choice Collection of Modern Relations, the Real EXISTENCE of Apparitions, Spirits, & Witches.”

A similar book titled The Discoverie of Witchcraft, was also on display—only this one was printed over two centuries later, in 1930. 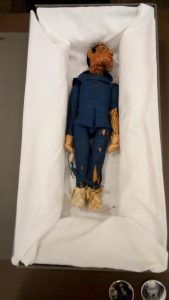 A Depression-era miniature of the Duke mascot, somewhat worse for wear.

Other historical gems the exhibit offered included an a threadbare ‘blue devil’ doll from the ‘30s; a book made up of a lengthy collection of newspaper clippings following the case of Lizzie Borden, a reported axe murderer from the 1890s; and an ad for the 1844 “Life Preserving Coffin … for use in doubtful cases of death.”

It’s not every day research will leave the casual viewer quaking in their boots, but Screamfest V was quick to live up to its name. Covering a broad swath of Duke materials from several centuries, this exhibit successfully pulled off vibes of education, spookiness, and Halloween fun, all at the same time.

Cheating Time to Watch Liquids do the Slow Dance