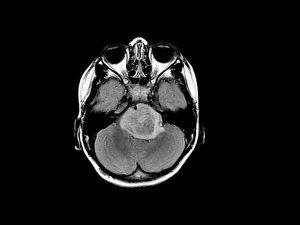 Survival rates for brain tumors have not improved since the 1960s; NIH Image Gallery.

Invasive brain tumors are among the hardest cancers to treat, and thus have some of the worst prognoses. 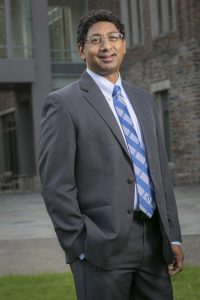 Dean of the Pratt School of Engineering, Ravi Bellamkonda, poses for his portrait inside and outside CIEMAS.

Displaying the survival rates for various brain tumors to the Genomic and Precision Medicine Forum on Thursday, Oct. 26, Duke professor Ravi Bellamkonda noted, “These numbers have not changed in any appreciable way since the 1960s.”

Unlike many other organs, which can sacrifice some tissue and remain functional, the brain does not perform the same way after removing the tumor. So a tumor without clearly defined boundaries is unsafe to remove without great risk to other parts of the patient’s brain, and in turn the patient’s quality of life.

Bellakonda hypothesized that brain tumors have characteristics that could be manipulated to treat these cancers. One key observation of brain tumors’ behavior is the tendency to form along white matter tracts. Put simply, tumors often spread by taking advantage of the brain’s existing structural pathways.

Bellakonda set out to build a device that would provide brain tumors a different path to follow, with the hope of drawing the tumor out of the brain where the cells could be killed.

The results were promising. Tests on rats and dogs with brain tumors showed that the device successfully guided out and killed tumor cells. Closer examination revealed that the cells killed were not cells that had multiplied as the tumor grew into the conduit, but were actually cells from the primary tumor.

In addition to acting as a treatment device, Bellakonda’s device could be co-opted for other uses. Monitoring the process of deep brain tumors proves a difficult task for neurooncologists, and by bringing cells from deep within the tumor to the surface, this device could make biopsies significantly easier.

Although the device presents promising results, Bellakonda challenged his lab to take what they have learned from the device to develop a less invasive technique.

Another researcher in the Bellakonda lab, Tarun Saxena, engaged in research to utilize the body’s natural protection mechanisms to contain brain tumors. Creating scar tissue around tumors can trick the brain into treating the tumor as a wound, leading to immunological responses that effectively contain and suppress the tumor’s growth.

Visiting researcher Johnathan Lyon proposed utilizing electrical fields to lead a tumor to move away from certain brain regions. Moving tumors away from structures like the pons, which is vital for regulation of vital functions like breathing, could make formerly untreatable tumors resectable. Lyon’s 3D cultures using this technique displayed promising results.

Another Bellakonda lab researcher, Nalini Mehta, has been researching utilizing a surprising mechanism to deliver drugs to treat tumors throughout the brain: salmonella. Salmonella genetically engineered to not invade cells but to easily pass through the extracellular matrix of the brain have proven to be effective at delivering treatment throughout the brain.

While all of these therapies are not quite ready to be used to treat the masses, Bellakonda and his colleagues’ work presents reasonable hope of progress in the way brain tumors are treated.