DURHAM, N.C. — A mere seven-plus decades after she first appeared in comic books in the early 1940s, Wonder Woman finally has her own movie.

In the two months since it premiered, the film has brought in more than $785 million worldwide, making it the highest grossing movie of the summer.

But if Hollywood has seen a number of recent hits with strong female leads, from “Wonder Woman” and “Atomic Blonde” to “Hidden Figures,” it doesn’t signal a change in how women are depicted on screen — at least not yet.

Those are the conclusions of three students who spent ten weeks this summer compiling and analyzing data on women’s roles in American film, through the Data+ summer research program.

The team relied on a measure called the Bechdel test, first depicted by the cartoonist Alison Bechdel in 1985.

The “Bechdel test” asks whether a movie features at least two women who talk to each other about anything besides a man. Surprisingly, a lot of films fail. Art by Srravya [CC0], via Wikimedia Commons.

To pass the Bechdel test, a movie must satisfy three basic requirements: it must have at least two named women in it, they must talk to each other, and their conversation must be about something other than a man.

It’s a low bar. The female characters don’t have to have power, or purpose, or buck gender stereotypes.

Even a movie in which two women only speak to each other briefly in one scene, about nail polish — as was the case with “American Hustle” —  gets a passing grade.

And yet more than 40 percent of all U.S. films fail.

The team used data from the bechdeltest.com website, a user-compiled database of over 7,000 movies where volunteers rate films based on the Bechdel criteria. The number of criteria a film passes adds up to its Bechdel score.

“Spider Man,” “The Jungle Book,” “Star Trek Beyond” and “The Hobbit” all fail by at least one of the criteria.

Films are more likely to pass today than they were in the 1970s, according to a 2014 study by FiveThirtyEight, the data journalism site created by Nate Silver.

The authors of that study analyzed 1,794 movies released between 1970 and 2013. They found that the number of passing films rose steadily from 1970 to 1995 but then began to stall.

In the past two decades, the proportion of passing films hasn’t budged. 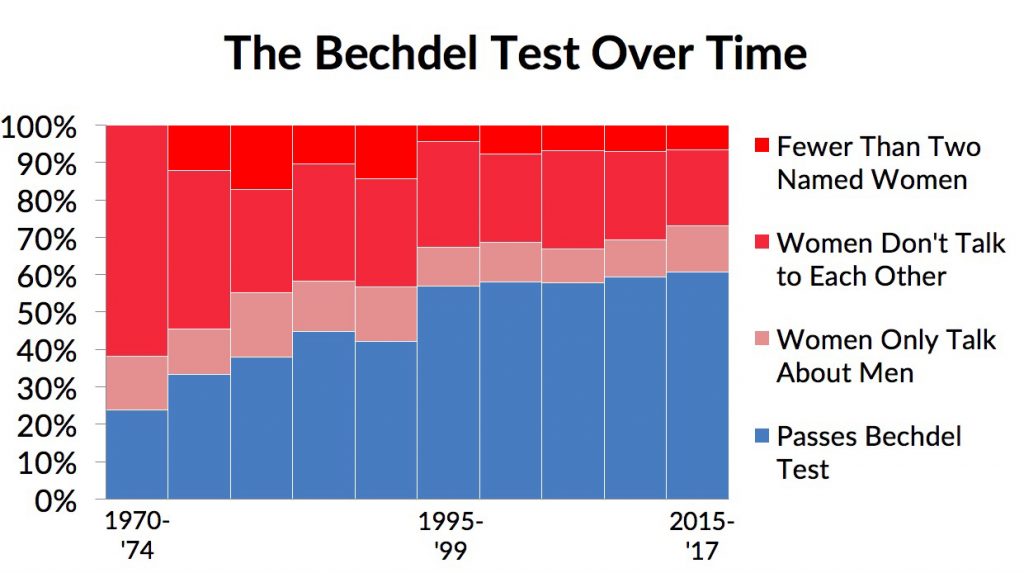 Since the mid-1990s, the proportion of films that pass the Bechdel test has flatlined at about 50 percent.

The Duke team was also able to obtain data from a 2016 study of the gender breakdown of movie dialogue in roughly 2,000 screenplays.

Men played two out of three top speaking roles in more than 80 percent of films, according to that study.

Using data from the screenplay study, the students plotted the relationship between a movie’s Bechdel score and the number of words spoken by female characters. Perhaps not surprisingly, films with higher Bechdel scores were also more likely to achieve gender parity in terms of speaking roles.

“The Bechdel test doesn’t really tell you if a film is feminist,” but it’s a good indicator of how much women speak, said team member Sammy Garland, a Duke sophomore majoring in statistics and Chinese.

Previous studies suggest that men do twice as much talking in most films — a proportion that has remained largely unchanged since 1995. The reason, researchers say, is not because male characters are more talkative individually, but because there are simply more male roles.

Achieving that, they say, ultimately comes down to who writes the script and chooses the cast.

The team did a network analysis of patterns of collaboration among 10,000 directors, writers and producers. Two people are joined whenever they worked together on the same movie. The 13 most influential and well-connected people in the American film industry were all men, whose films had average Bechdel scores ranging from 1.5 to 2.6 — meaning no top producer is regularly making films that pass the Bechdel test.

“What this tells us is there is no one big influential producer who is moving the needle. We have no champion,” Garland said.

Men and women were equally represented in fewer than 10 percent of production crews.

But assembling a more gender-balanced production team in the early stages of a film can make a difference, research shows. Films with more women in top production roles have female characters who speak more too.

“To better represent women on screen you need more women behind the scenes,” Garland said.

Dollar for dollar, making an effort to close the Hollywood gender gap can mean better returns at the box office too. Films that pass the Bechdel test earn $2.68 for every dollar spent, compared with $2.45 for films that fail — a 23-cent better return on investment, according to FiveThirtyEight.

Other versions of the Bechdel test have been proposed to measure race and gender in film more broadly. The advantage of analyzing the Bechdel data is that thousands of films have already been scored, said English major and Data+ team member Aaron VanSteinberg.

“We tried to watch a movie a week, but we just didn’t have time to watch thousands of movies,” VanSteinberg said.

A new report on diversity in Hollywood from the University of Southern California suggests the same lack of progress is true for other groups as well. In nearly 900 top-grossing films from 2007 to 2016, disabled, Latino and LGBTQ characters were consistently underrepresented relative to their makeup in the U.S. population.

Berkman, Garland and VanSteinberg were among more than 70 students selected for the 2017 Data+ program, which included data-driven projects on photojournalism, art restoration, public policy and more.

They presented their work at the Data+ Final Symposium on July 28 in Gross Hall.

Data+ is sponsored by Bass Connections, the Information Initiative at Duke, the Social Science Research Institute, the departments of mathematics and statistical science and MEDx.

Mapping Electricity Access for a Sixth of the World's People