Mapping Electricity Access for a Sixth of the World's People

DURHAM, N.C. — Most Americans can charge their cell phones, raid the fridge or boot up their laptops at any time without a second thought.

Not so for the 1.2 billion people — roughly 16 percent of the world’s population — with no access to electricity.

Despite improvements over the past two decades, an estimated 780 million people will still be without power by 2030, especially in rural parts of sub-Saharan Africa, Asia and the Pacific.

To get power to these people, first officials need to locate them. But for much of the developing world, reliable, up-to-date data on electricity access is hard to come by.

For ten weeks from May through July, a team of Duke students in the Data+ summer research program worked on developing ways to assess electricity access automatically, using satellite imagery.

“Ground surveys take a lot of time, money and manpower,” said Data+ team member Ben Brigman. “As it is now, the only way to figure out if a village has electricity is to send someone out there to check. You can’t call them up or put out an online poll, because they won’t be able to answer.” 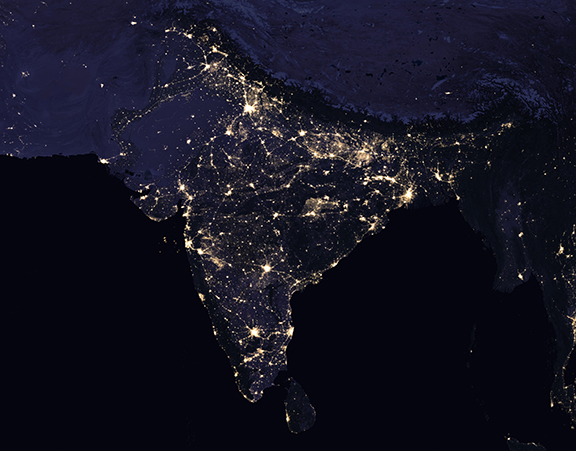 Led by researchers in the Energy Data Analytics Lab and the Sustainable Energy Transitions Initiative, “the initial goal was to create a map of India, showing every village or town that does or does not have access to electricity,” said team member Trishul Nagenalli.

Electricity makes it possible to pump groundwater for crops, refrigerate food and medicines, and study or work after dark. But in parts of rural India, where Nagenalli’s parents grew up, many households use kerosene lamps to light homes at night, and wood or animal dung as cooking fuel.

Fires from overturned kerosene lamps are not uncommon, and indoor air pollution from cooking with solid fuels contributes to low birth weight, pneumonia and other health problems.

In 2005, the Indian government set out to provide electricity to all households within five years. Yet a quarter of India’s population still lives without power.

Ultimately, the goal is to create a machine learning algorithm — basically a set of instructions for a computer to follow — that can recognize power plants, irrigated fields and other indicators of electricity in satellite images, much like the algorithms that recognize your face on Facebook.

Rather than being programmed with specific instructions, machine learning algorithms “learn” from large amounts of data.

This summer the researchers focused on the unsung first step in the process: preparing the training data. 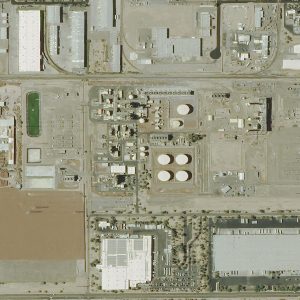 Satellite image of a power plant in Phoenix, Arizona

Fellow Duke students Gouttham Chandrasekar, Shamikh Hossain and Boning Li were also part of the effort. First they compiled publicly available satellite images of U.S. power plants. Rather than painstakingly framing and labeling the plants in each photo themselves, they tapped the powers of the Internet to outsource the task and hired other people to annotate the images for them, using a crowdsourcing service called Amazon Mechanical Turk.

So far, they have collected more than 8,500 image annotations of different kinds of power plants, including oil, natural gas, hydroelectric and solar.

The team also compiled firsthand observations of the electrification rate for more than 36,000 villages in the Indian state of Bihar, which has one of the lowest electrification rates in the country. For each village, they also gathered satellite images showing light intensity at night, along with density of green land and other indicators of irrigated farms, as proxies for electricity consumption.

Using these data sets, the goal is to develop a computer algorithm which, through machine learning, teaches itself to detect similar features in unlabeled images, and distinguishes towns and villages that are connected to the grid from those that aren’t.

“We would like to develop our final algorithm to essentially go into a developing country and analyze whether or not a community there has access to electricity, and if so what kind,” Chandrasekar said. 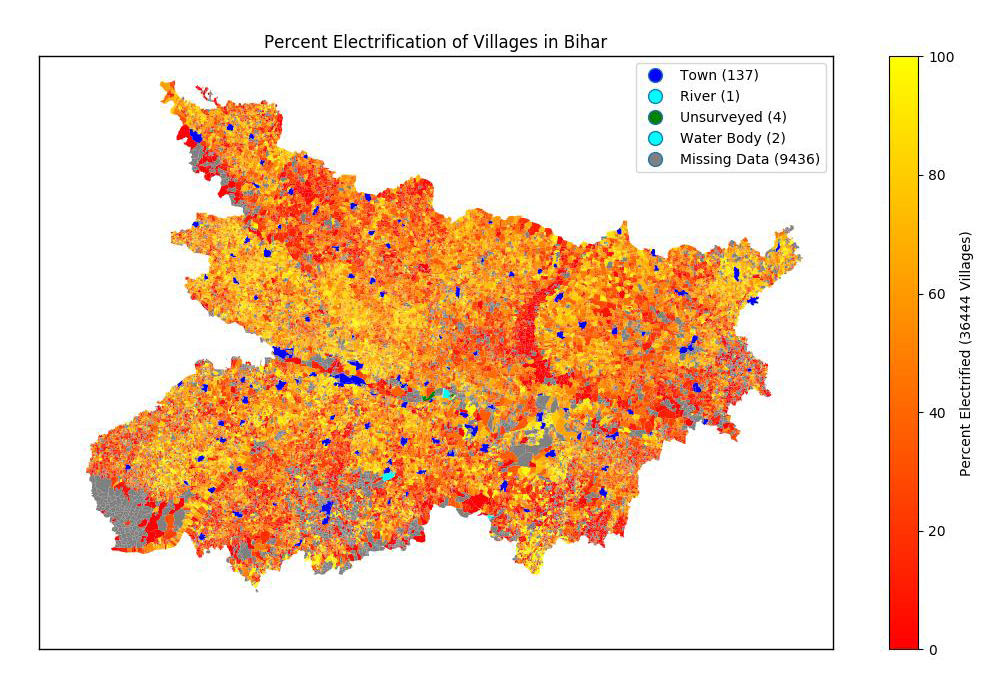 The proportion of households connected to the grid in more than 36,000 villages in Bihar, India

The project is far from finished. During the 2017-2018 school year, a Bass Connections team will continue to build on their work.

The summer team presented their research at the Data+ Final Symposium on July 28 in Gross Hall.

Data+ is sponsored by Bass Connections, the Information Initiative at Duke, the Social Science Research Institute, the departments of mathematics and statistical science and MEDx. This project team was also supported by the Duke University Energy Initiative.

Not Your Basic Bench: Zebrafish Reveal Secrets of the Developing Gut