If the Cancer Doesn't Kill You, the Drug Prices Might

The medical community is growing alarmed about a creeping malady that can diminish the quality of life for patients in treatment and even shorten their lives.

It’s found everywhere in the United States, but not to the same degree in other developed countries. They’re calling it “Financial Toxicity.” 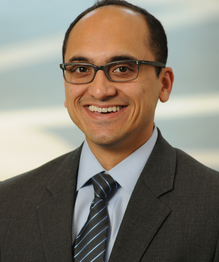 Yousuf Zafar is an oncologist and health policy researcher.

A cancer diagnosis more than doubles an American’s chance of declaring bankruptcy, Duke medical oncologist  Yousuf Zafar, MD, MHS,  told an audience of nursing faculty and students at a May 10 luncheon lecture sponsored by the Duke Center for Community and Population Health Improvement. And that bankruptcy, in turn, has been shown to decrease survival rates.

In addition to treating cancer patients, Zafar studies access to care and the cost of care at the Duke Cancer Institute, the Sanford School of Public Policy, and the Margolis Center for Health Policy.

Zafar told personal stories of two patients who waved off treatments because of the financial hardship they feared.

Gleevec (Imatinib) is an oral chemotherapy made by Novartis.

One of them had a job with health insurance, but no prescription drug coverage, which put him on the hook for $4,000 in medications to treat his rectal cancer for just a few weeks. Had either the patient or Dr. Zafar brought the topic up, the costs might have been avoided, but they never talked about money, he said.

The other patient passed up another round of treatment for his pancreatic cancer, for fear of the bills his family would be saddled with when he died.

“Pricing in the European Union and the rest of the world is a completely different picture,” he said.  In the US, pricing “simply reflects what the market will bear.”

Another source of the steep climb is the advent of biologic drugs, which are expensive to develop, use and store, but offer more targeted therapy for individual patients. One of the most successful of these is Gleevec (Imatinib) an oral chemotherapy that became 158 percent more expensive from 2007 to 2014, Zafar said.

If you do a Google search for Gleevec, the first thing you find is a Novartis page with the headline “Understand Your Out-Of-Pocket Costs For Gleevec” that includes a link to financial assistance resources.

In the face of outrageous costs and questionable benefits, a treatment team in many cases can help patients find other means of support or alternative treatments to achieve the same end with less financial damage. But they have to have the conversation, Zafar said. He’d like to see Duke’s Cancer Center become the first in the country to be totally transparent about costs, but he acknowledged that it may be a difficult quest.

To help enable those conversations, Zafar developed a mobile app called Pathlight to help patients make more informed decisions and plan better for the financial burden of treatment. For some of the technology used in the project, Zafar has partnered with a software company called Vivor, which has found innovative ways to help patients navigate to financial assistance programs. That part of the project is supported by the NIH’s National Cancer Institute.

Even for people not in treatment, drugs have become more costly. Healthcare premiums rose 182 percent from 1999 to 2013, with workers paying an increasing share of the cost of their own employee health plans.

Is this any way to run a health system?

“I don’t have all the answers – I don’t think anybody does,” Zafar said. “But I think we need to move toward a single-payer system.”