From the highlands of north central Peru to high schools in North Carolina, student researchers in Duke’s Bass Connections program are gathering data in all sorts of unique places.

As the school year winds down, they packed into Duke’s Scharf Hall last week to hear one another’s stories. 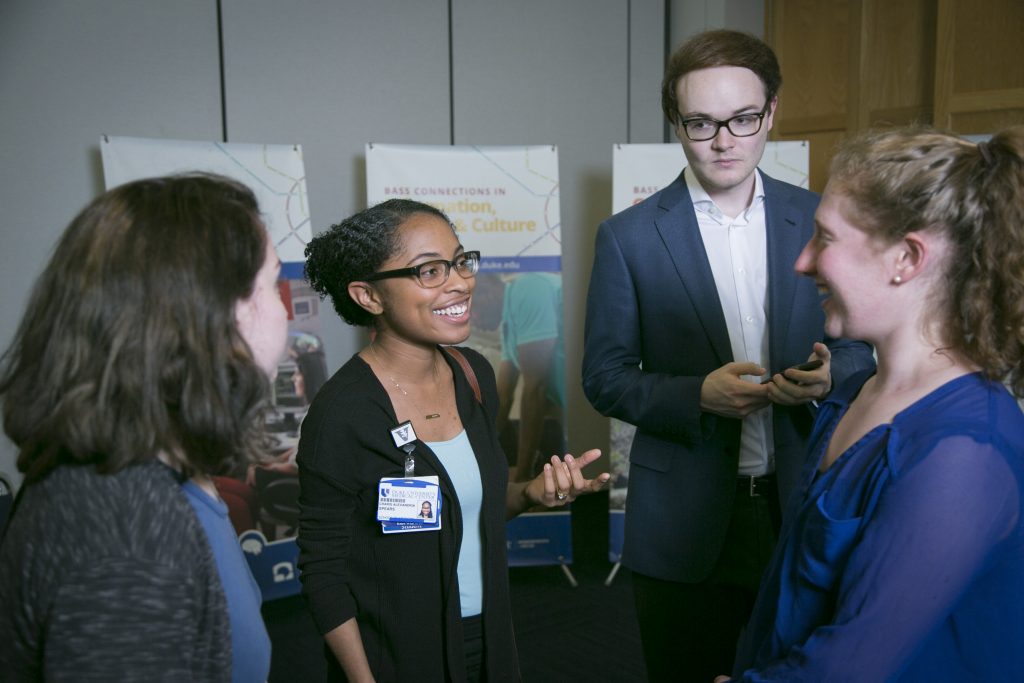 Students and faculty gathered in Scharf Hall to learn about each other’s research at this year’s Bass Connections showcase. Photo by Jared Lazarus/Duke Photography.

The Bass Connections program brings together interdisciplinary teams of undergraduates, graduate students and professors to tackle big questions in research. This year’s showcase, which featured poster presentations and five “lightning talks,” was the first to include teams spanning all five of the program’s diverse themes: Brain and Society; Information, Society and Culture; Global Health; Education and Human Development; and Energy.

“The students wanted an opportunity to learn from one another about what they had been working on across all the different themes over the course of the year,” said Lori Bennear, associate professor of environmental economics and policy at the Nicholas School, during the opening remarks.

The different investigations took students from rural areas of Peru, where teams interviewed local residents to better understand the transmission of deadly diseases like malaria and leishmaniasis, to the North Carolina Museum of Art, where mathematicians and engineers worked side-by-side with artists to restore paintings. 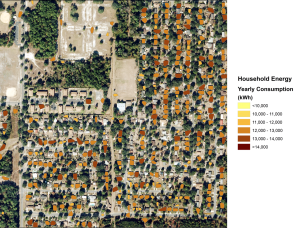 Students in the Energy Data Analytics Lab didn’t have to look much farther than their smart phones for the data they needed to better understand energy use.

“Here you can see a satellite image, very similar to one you can find on Google maps,” said Eric Peshkin, a junior mathematics major, as he showed an aerial photo of an urban area featuring buildings and a highway. “The question is how can this be useful to us as researchers?”

With the help of new machine-learning algorithms, images like these could soon give researchers oodles of valuable information about energy consumption, Peshkin said.

“For example, what if we could pick out buildings and estimate their energy usage on a per-building level?” said Hoël Wiesner, a second year master’s student at the Nicholas School. “There is not really a good data set for this out there because utilities that do have this information tend to keep it private for commercial reasons.”

The lab has had success developing algorithms that can estimate the size and location of solar panels from aerial photos. Peshkin and Wiesner described how they are now creating new algorithms that can first identify the size and locations of buildings in satellite imagery, and then estimate their energy usage. These tools could provide a quick and easy way to evaluate the total energy needs in any neighborhood, town or city in the U.S. or around the world.

“It’s not just that we can take one city, say Norfolk, Virginia, and estimate the buildings there. If you give us Reno, Tuscaloosa, Las Vegas, Pheonix — my hometown — you can absolutely get the per-building energy estimations,” Peshkin said. “And what that means is that policy makers will be more informed, NGOs will have the ability to best service their community, and more efficient, more accurate energy policy can be implemented.”

Some students’ research took them to the sidelines of local sports fields. Joost Op’t Eynde, a master’s student in biomedical engineering, described how he and his colleagues on a Brain and Society team are working with high school and youth football leagues to sort out what exactly happens to the brain during a high-impact sports game.

While a particularly nasty hit to the head might cause clear symptoms that can be diagnosed as a concussion, the accumulation of lesser impacts over the course of a game or season may also affect the brain. Eynde and his team are developing a set of tools to monitor both these impacts and their effects. 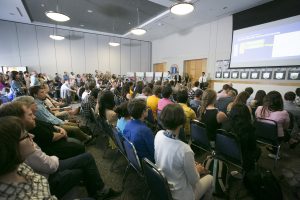 A standing-room only crowd listened to a team present on their work “Tackling Concussions.” Photo by Jared Lazarus/Duke Photography.

“We talk about inputs and outputs — what happens, and what are the results,” Eynde said. “For the inputs, we want to actually see when somebody gets hit, how they get hit, what kinds of things they experience, and what is going on in the head. And the output is we want to look at a way to assess objectively.”

The tools include surveys to estimate how often a player is impacted, an in-ear accelerometer called the DASHR that measures the intensity of jostles to the head, and tests of players’ performance on eye-tracking tasks.

“Right now we are looking on the scale of a season, maybe two seasons,” Eynde said. “What we would like to do in the future is actually follow some of these students throughout their career and get the full data for four years or however long they are involved in the program, and find out more of the long-term effects of what they experience.”