Life Lessons from a Neuroscientist

I recently had the privilege of sitting down with Dr. Anne Buckley, a professor and  neuropathologist working in Dr. Chay Kuo’s cell biology lab at Duke. I got a first-hand account of her research on neuron development and function in mice. But just as fascinating to me were the life lessons she had learned during her time as a researcher. 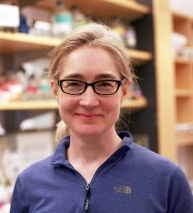 Anne Buckley, M.D. Ph.D., is an assistant professor of pathology

Buckley’s research looks at brain tumors in mice. She recently found that some of the mice developed the tumors in an area full of neurons, the roof of the fourth ventricle, which is of particular interest because humans have developed tumors in the same location. This discovery could show how neurological pathways affect tumor formation and progression.

Buckley also gave me some critical words of advice, cautioning me that research isn’t for everyone.

“Research is not glamorous, and not always rewarding,” she warned me. When she first started research, Buckley learned a hard lesson: work doesn’t necessarily lead to results. “For every question I went after, I found ten more unresolved,” she said. “To be a researcher, it takes a lot of perseverance and resilience. A lot of long nights.”

But that’s also the beauty of research. Buckley says that she’s learned to find happiness in the small successes, and that she “enjoys the process, enjoys the challenge.”

And when discoveries happen?

“When I look at data, and I see something unexpected, I get really excited,” she says. “I know something that no one else knows. Tomorrow, everyone will know. But tonight, I’m the only person in the world who knows.”

Using the Statistics of Disorder to Unravel Real-World Chaos