Beauty is in the Ear of the Beholder Too

Just the suggestion that an African-American person is of mixed-race heritage makes that person more attractive to others, research from Duke University concludes. 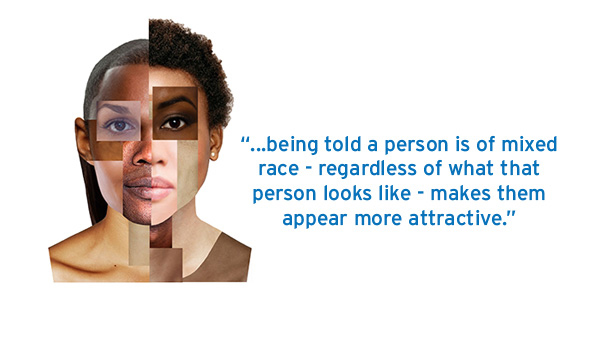 This holds true even if the people in question aren’t actually of multiracial heritage, according to the peer-reviewed study, published in the June 2016 issue of Review of Black Political Economy.

“Being exotic is a compelling idea,” Reece says. “So people are attracted to a certain type of difference. It’s also partially just racism – the notion that black people are less attractive, so being partially not-black makes you more attractive.”

Reece used data from the National Longitudinal Study of Adolescent Health. He examined the results of in-person interviews of 3,200 black people conducted by people of varying races. The interviewees were asked a series of questions that included their racial backgrounds. The questioners then ranked each person’s attractiveness on a scale of 1 to 5, with 1 being the least attractive and 5 being the most attractive. The interviewees who identified as mixed race were given an average attractiveness rating of 3.74; those who identified as black were given a 3.47 score – a statistically significant difference that points to the power of perception, Reece says. (The study controlled for a number of factors such as gender, age, skin tone, hair color and eye color)

“Race is more than we think it is,” he says. “It’s more than physical characteristics and ancestry and social class. The idea that you’re a certain race shapes how people view you.”

Robert Reece is a doctoral candidate in sociology at Duke.

Reece’s findings bolster a viewpoint that lighter-skinned blacks are considered more physically striking than their darker-skinned counterparts. But his research also found that blacks with darker skin who identified as mixed-race were considered better looking than those with lighter skin who identified simply as black. This further emphasizes the power of suggestion, Reece says; being told a person is of mixed race – regardless of what that person looks like – makes them appear more attractive.

Reece tackled this topic to examine the connection between multiraciality and “color,” he says.

“People tend to assume that historical multiraciality is at least partially responsible for the broad range of color among black people,” he says. “I’ve even noticed some people in black communities casually using the terms “mixed” and “light skinned” interchangeably. So I wanted to begin an empirical investigation into the contemporary links between the two and how they combine to shape people’s life experiences. Attractiveness is one part of that.”

Taking Math Beyond the Blackboard

LHC Reveals No New Physics Yet, but Duke Scientists Stay the Hunt