A Link Between Stress and Aging in African-Americans

A recent study finds that lifetime stress in a population of African Americans causes chemical changes to their DNA that may be associated with an increased risk of aging related diseases.

Using a previously established DNA-based predictor of age known as the “epigenetic clock,” researchers found that a cohort of highly-traumatized African Americans were more likely to show aging-associated biochemical signatures in their DNA’s epigenetic clock regions at an earlier age than what would otherwise be predicted by their chronological age.

These chemical alterations to DNA’s epigenetic clock were found to be a result of hormonal changes that occur during the body’s stress response and corresponded to genetic profiles associated with aging-related diseases.

The study was performed by researchers at the Max Planck Institute of Psychiatry in Germany, including Duke University adjunct faculty and psychiatrist Dr. Anthony S. Zannas. The findings were published in a recent issue of Genome Biology.

“Our genomes have likely not evolved to tolerate the constant pressure that comes with today’s fast-paced society,” says lead author Zannas.

Though it may come as no surprise that chronic stress is detrimental to human health, these findings provide a novel biological mechanism for the negative effects of cumulative lifetime stressors, such as those that can come with being a discriminated minority.

Epigenetics is the study of how environmental factors switch our genes on or off. The epigenetic clock is comprised of over 300 sites in our DNA that are subject to a certain chemical modification known as methylation, which physically prevents those sites from being expressed (i.e., turns them off). Conversely, areas within the epigenetic clock can also be de-methylated to turn genes on. Each methylation event can be thought of as a tick of the epigenetic clock’s metaphorical second-hand, corresponding to the passing of physiological time.

During times of stress, a family of hormones known as glucocorticoids becomes elevated throughout the body. These glucocorticoids cause the chemical addition or removal of methyl groups to areas of DNA that the authors found to be located in the same regions that comprise the epigenetic clock. What’s more, the specific changes in methylation were found to correspond with gene expression profiles associated with coronary artery disease, arteriosclerosis, and leukemias.

This link between stress, glucocorticoids, and the epigenetic clock provides evidence that lifetime stress experienced by highly traumatized African Americans promotes physiological changes that affect their overall health and longevity.

The authors make an important distinction between cumulative lifetime stress and current stress. A small number of instances of acute stress may result in a correspondingly small number of methylation changes in the epigenetic clock, but it is the cumulative methylation events from chronic stress that give rise to lasting physiological detriments.

Though the authors make no direct claims regarding the physiological effects of racial inequities prevalent in today’s society, the findings perhaps shed light on the health disparities observed between disadvantaged African American populations and more privileged demographics, including increased mortality rates for cancer, heart disease, and stroke. 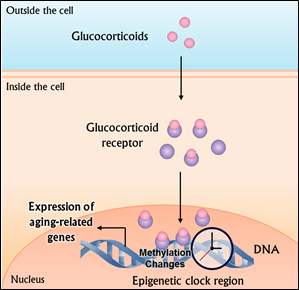 Glucocorticoids become elevated during the body’s stress response and lead to changes in DNA methylation that promote the expression of genes associated with aging.
Illustration by Katy Riccione

Interestingly, the epigenetic effects of lifetime stress were blunted in individuals who underwent significant childhood trauma, suggesting that early trauma may trigger mechanisms of physiological resilience to chronic stress later in life. In other words, if racial minorities are more likely to face hardships during their upbringing, perhaps they are also better prepared to cope with the chronic stress that comes with, for instance, losing a job or ending a marriage.

Though the study relies on data from an African American cohort, Dr. Zannas believes that the same conclusions are likely applicable to other highly stressed populations: chronic stress leads to lasting changes in our epigenome that may increase our likelihood of aging-related diseases, while acute stress was not found to have any long-term epigenetic effects.

So a single tough calculus exam won’t shave years off of your life, but consistent 80-hour work weeks just may.

In a world where everyday stress is unavoidable, whether it be from the hardships faced as a minority or the demands of being a full-time student, what lifestyle choices can we make to limit the detriments to our health? Dr. Zannas emphasizes that the “solution is not to avoid all stressors, but to prevent excessive stressors when possible and to learn to live with unavoidable stress constructively.”

The study underscores the importance of stress management on our general well-being. Future research may highlight the direct chemical benefits to our epigenome that are afforded by mindfulness, psychotherapy, diet/exercise, and other modes of stress relief. “Learning to better cope with stress is the best way to reduce our physiological response to it and the resultant harmful effects.”

In the Land of Fantasy, Inequality is Benign

Why Testing Lemur Color Vision is Harder Than it Looks