Imagine two scenarios. In the first, one of your close friends is driving down the road when, from behind, they hear the sound of wailing sirens. They pull off onto a side­street and ten minutes later they’re back on the road, holding a fresh speeding ticket. In the second, imagine the exact same scenario, but this time it’s not a close friend, it’s a random person who you know nothing about. 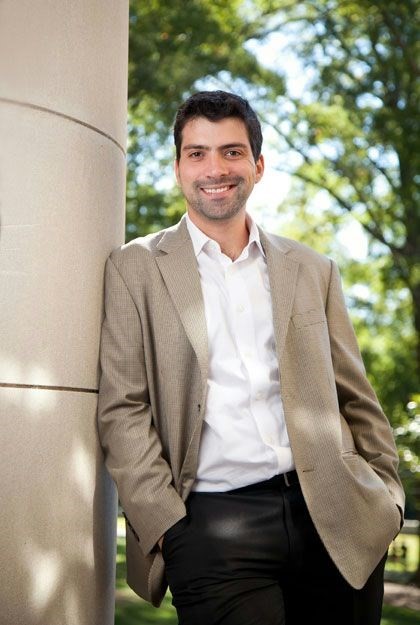 Felipe DeBrigard is an assistant professor of philosophy and a member of the Duke Institute for Brain Sciences. (Les Todd, Duke Photo)

This is the kind of scenario philosophy professor Felipe De Brigard might put someone through for his research. But while asking these questions, he would also be using an MRI machine to measure blood­flow in the brain and using the resulting data to think about philosophy.

De Brigard’s research is mostly concerned with this kind of thinking, the imagination of possibilities which never happened, but which ​could​ have happened. How many times have you wished you could change something about yourself? “Oh, if only I were two inches taller!?”

The way the brain does this, and what it means, are exactly what De Brigard is thinking about. For the example of speeding tickets, he’s found that in the first scenario, in which, your friend gets a ticket, the imagination activates parts of the brain which are also connected to autobiographical memory. It’s almost like you’re remembering something that happened to yourself.

But in the second scenario, the one with the stranger, he’s found something very different. The imagination activates parts of the brain which are connected to “semantic memory,” the memory of hard facts and data. This process is far more logical, he says.

What does this mean? That’s where the philosophy comes in. He says that memory is not a perfect window into the past, but instead “really good at allowing you to recall what could have been.”

The question which he’s asking now is how similar memory and imagination are and how they interact. It’s opening up new and exciting avenues for research. Research which can only be investigated using De Brigard’s bold, interdisciplinary approach to the mind.

Guest Post by Joe Wiswell, a senior at the North Carolina School of Science and Math

Measuring the Mechanical Forces of Disease