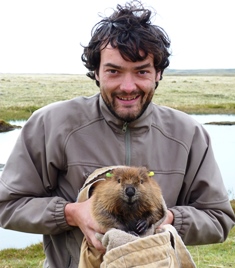 Alejandro Pietrek and a subject of his research. Photo by Duke Forward.

For three years, Duke student Alejandro Pietrek has bravely grappled with some unusual marauders of the forests and steppes of Patagonia: invasive beavers. A biology graduate student, Pietrek recently presented his dissertation on the “Demography of invasive beavers in the heterogeneous landscapes of Patagonia.” Pietrek has studied over two dozen colonies of beavers in order to answer three questions:

Pietrek began by explaining how the furry rodents started ravaging the natural habitat of Patagonia, beginning with 20 beavers intentionally introduced into the forests of Tierra del Fuego in 1946. By the late 1960s, the growing colonies spread to the continent.

Today there are an estimated 100,000 individuals in Patagonia, disrupting the regional habitats and destroying biodiversity.

The biologist tackled his first question via quantitative science. “Very simply mathematical models have shown that speed of invasion is determined by two main things: population growth rate and movement,” he said. How the different habitats of Patagonia affected this invasion was what he worked to find out, by measuring colony size and the number of kits. Pietrek directly observed 25 colonies in each habitat over three years, using binoculars and seemingly endless patience. “It was very fun,” he said. He found that steppe habitats tended to have higher numbers of beavers and kits compared to forest.

Pietrek believed that the answer to the first question was counterintuitive, and he explored the possible reason in the second, where he figured the cause to be density dependence, as beavers in the steppe were more likely to survive in higher populations, and thus were dependent on living in large colonies for survival. In the forest, colony size wasn’t as important to the survival of the beavers. Pietrek found that as population density increased, the animals’ choice of landform changed: with denser numbers, the beavers were more likely to choose u-shaped valleys and plains than canyons. He noted the importance of identifying the preferred habitat of beavers, as it may allow easier detection of the presence of the invasive species.

Finally, Pietrek applied his findings toward the management of biological invasions. “One thing we can do is to build a model to predict the spread of beavers,” he said. He observed that beavers spread on average 7.8 km per year, though he also used individual-based models as well in order to track juvenile beavers. He found that young beavers tended to disperse and form new colonies, and formed another model in order to track this dispersal pattern. Juvenile beavers will first search for mates within their original colonies, only moving along if none can be found. These findings make for easier tracking of beavers across the landscape, allowing for easier management of their population growth.

Seeing the Research for the Trees