Groundbreaking neuroscience studies, referred to as the “final frontier” of research by Duke Institute for Brain Sciences director Allen Song, were the focus of the grand opening celebration at DIBS last week.

The Institute celebrated its new home underground at the Levine Science Research Center with a symposium and then a party on Sept. 10.

Faculty and students across multiple schools and disciplines worked together for the chance to earn dibs on DIBS seed money in a competition known as the Incubator Awards. Each project sought seed grants of up to $150,000 for their research in the hopes that they could show enough promise to earn outside funding and continue their work.

The awards program began in 2007, and it’s working. DIBS seed funding of $3.4 million has been given to 34 projects which then garnered $40 million in federal and foundation grants to Duke.

These research projects have resulted in 36 research publications, three invention disclosures and patents, and more than 30 undergraduate and graduate students becoming involved with pioneering investigations into the human’s most complex organ.

Here are a few of the award-winning projects:

The team began using brain scans of the mice, after noting the many limitations of comparing behavioral abnormalities of affected mice to humans with the disorder. The brain scans revealed that the mice with the gene had atypical brain connectivity. The researchers intend to work with the National Institutes of Health (NIH) to use these results in order to develop drugs that provide better treatment for autism. 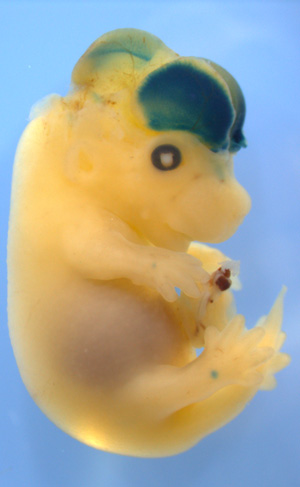 The same neuro-inflammatory injuries found in the brain may also be seen in the retina, which is much more visible to doctors looking for a diagnosis. While there have been previous studies on the subject, they have been limited by factors such as small sample size and outdated imaging techniques. Using DIBS’s resources allowed the team to circumvent these issues and gather valuable data. The team’s next steps include studying the retina damage’s association with age-related macular degeneration, as well as completing one-year follow-up examinations of the patients’ progression.

“Brain Evolution” was a project launched by Blanche Capel (Cell Biology); Debra Silver (Molecular Genetics & Microbiology); and Greg Wray (Biology) with the goal of learning about the role of enhancers that regulate genes in brain development. The scientists studied how HARE5, an enhancer that is very pronounced in humans, was involved in the development of the cerebral cortex.

Mice raised with human HARE5 were shown to have a 12% larger brain on average than their typical counterparts. This was the first functional demonstration that species-specific enhancers impact development of the cerebral cortex. Future goals of the team include studying how HARE5 affects adult mice, as well as investigating the roles of HARE2 and HARE3.

Visualizing Crystals of the Cosmos