Student Ideas Have a Place to Call Home

Student project teams have become an important part of engineering education at Duke and elsewhere in recent years, but our campus wasn’t always the easiest place for them to work.

DukeMakers showed off a 3D-printed replica of Duke Chapel in the same blue as its construction tarping.

When the robotic submarine team needed to test for leaks in their craft, “we used to roll a bin down the hallway at CIEMAS and fill it up at the water fountain,” said Will Stewart, a junior on the club.

Stewart was showing off his team’s shiny new workroom in The Foundry, a purpose-built 7,600-square-foot space on two levels in the basement of Gross Hall. It has a huge industrial sink. 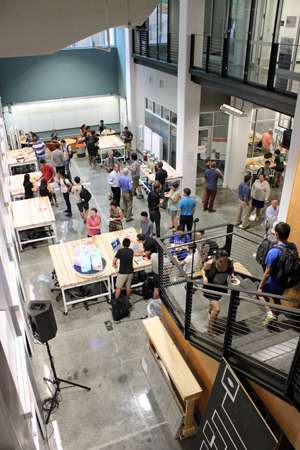 The Foundry’s airy main workspace was once the home to grimy, ugly machinery that sustained Gross Hall.

Throughout the Foundry, lockers for gear double as whiteboards and sturdy butcher block tables stand ready to take any pounding, grinding and soldering the students can dream up.

In addition to the dedicated spaces for the larger project teams. there is plenty of meeting space and shop space for optics and electronics and some light machining.

Originally the home to big, ugly utilities for the one-time chemistry building, the Foundry space was converted for student use with input from students and faculty representing the Pratt School of Engineering, the Innovation Co-Lab, Duke Innovation and Entrepreneurship, the Nicholas School of the Environment, the Physics Department, and Gross Hall neighbors the Energy Initiative and the Information Initiative.

“It’s amazing that what was actually an ugly space in the basement could turn into a beautiful space for students,” Interim Engineering Dean George Truskey said in brief remarks.

The Electric Vehicle Club is looking forward to having one good space, rather than six cramped rooms spread around Hudson Hall to build their super-efficient carbon fiber prototypes. “So far, what we have fits, but we’re actually looking for more space,” said club president Charlie Kritzmacher. “We’re a pretty big club.”

An Exploration in Tech: From Altamira to Google