Uneasy Lies the Gut That Wears the Crown

Meerkats of the Kalahari Desert are social, and wormy. (Photo by Ed Kabay)

The dominant matriarchs of meerkat society carry a heavy burden.

Not only are these females stressed from having to constantly scold and cajole the rowdy members of the tribe to maintain their perch as the primary breeders and enforcers of the clan, they apparently host more parasites as well.

Specifically, she gathered 97 freshly deposited poops for later analysis. Such is the glamour of graduate student field work.

After diluting and spinning, the samples were microscopically analyzed for careful counting of the eggs of six species of intestinal worms.

What Smyth found in the end was consistent with similar studies done in male-dominant societies: The boss is more heavily parasitized.

So, why is that? Well, it might be that the matriarch’s stressful job takes some resources away from her immune defenses, or it may be that her close contact with more members of the tribe puts her at greater risk of picking up worms from others. 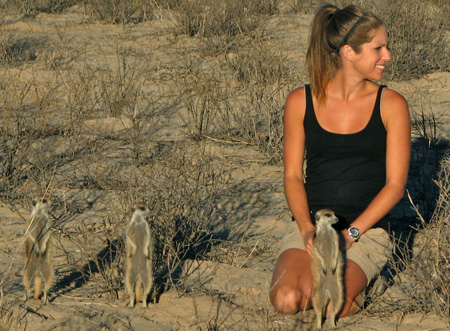 The bottom line is that the meerkat model of sexual selection carries a cost, which, as in other species, is more heavily borne by the breeders.

Smyth’s findings appeared online this month in Behavioral Ecology and are a part of her dissertation research on immune function in meerkats. In addition to poop, she’s sampling blood and looking at hormone levels and other variables.

“Parasites are a proxy for measuring the immune system,” said Smyth, who is a fourth-year grad student with Christine Drea of Evolutionary Anthropology and the Program in Ecology.

And wild-living meerkats can be a kind of proxy for humans. “Most of what we know about the immune system comes from laboratory mice living in unrealistic conditions,” Smyth said. “They’re housed singly in clean cages and they’re parasite-free. I’m not convinced that that’s how the immune system works when you put them in the natural world.”

“For any kind of species living in groups, like humans, it’s important to understand the dynamics of the spread of disease and which individuals might be susceptible,” she said. 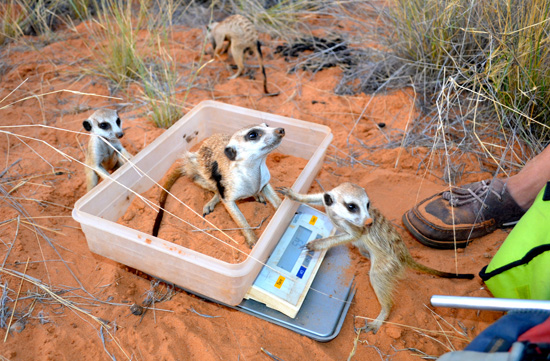 During one meerkat weigh-in, this practical joker put his thumb on the scale. (Photo by Kendra Smyth)

This work was supported by the National Science Foundation (IOS-1021633) and a dissertation travel grant from the Duke Graduate School. Research at the Kuruman River Reserve is supported by the European Research Council (294494), Cambridge, Duke and Zurich Universities.

Four-Fifths of a Banana is Better than Half