Bringing a Lot of Energy to Research

The Duke Energy Initiative‘s annual research collaboration workshop on May 5 was an update on how the campus-wide alliance of more than 130 faculty has been pursuing its goals of making energy  “accessible, affordable, reliable and clean.” In short, they’ve been busy! 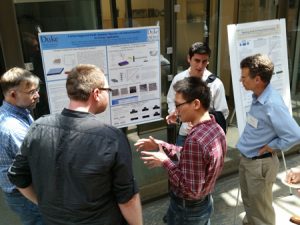 At the afternoon session in Gross Hall, David Mitzi, professor of mechanical engineering and materials science, led a panel of five-minute updates on energy materials including engineered microbes, computational modeling of materials, solar cells built on plastic rather than glass, and a nanomaterial-based sheet of material that would combine photovoltaics with storage on a single film.

Kyle Bradbury, managing director of the new Energy Data Analytics Lab that works with the ‘big data’ folks at iiD and the social scientists at SSRI, led a panel on the lab’s latest projects. As smart meters and Internet-enabled appliances enter the market, energy analysts will be flooded with new data, Bradbury explained. There should be great potential to improve efficiency and provide customers with useful real-time feedback, but first the torrent of information has to be corralled and analyzed. 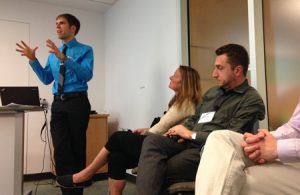 For one example of what big energy data might do, Bradbury and Electrical and Computer Engineering professor Leslie Collins (his former advisor) have done a pilot study to see if computers could be taught to  pick out roof-top solar arrays in satellite photos.  Nobody actually knows how many arrays there are or how much power they’re producing, Collins said. But without too much fussing around, their first visual search algorithm spotted 92 percent of the arrays correctly in some hand-picked images of California neighborhoods. Ramped up and tweaked, such an automated search could begin to identify just how much residential solar there is, where it is, and roughly how much energy it’s producing.

The third group of researchers, moderated by Energy Initiative associate Daniel Raimi, is working on energy markets and policy, including energy systems modeling and the regulation of green house gasses through the Clean Air Act.

Energy Initiative director Richard Newell said there were 1,400 Duke students enrolled in energy-related courses this year. A first round of six seed-funded research projects was completed and seven new projects have been selected. Eight Bass Connections teams in the energy theme were very productive as well, examining smart grids, solar energy and household energy conservation with teams of undergraduates, graduate students and faculty.

Researcher Goes to the Dogs, Lands on TV