When Bad Viruses Do Good 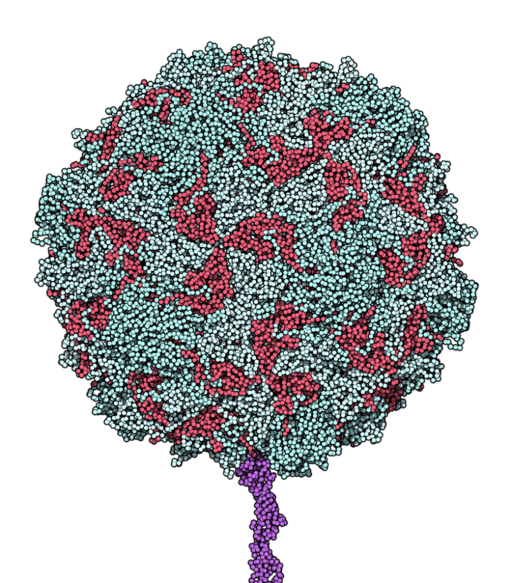 Poliovirus binding to a receptor, the first stage in infection.

The polio vaccine was a medical triumph, single-handedly decreasing the number of polio cases in the world from more than 350,000 in 1988 to only 416 in 2013. Now, surgeons at Duke University are using the once universally feared virus to target another disease – cancer.

One of the big problems with cancer is that your body doesn’t know it’s dangerous.  For most infections, your immune system learns to recognize what a dangerous or infected cell looks like. Cells infected by a virus will display protein markers which alert your immune system that they are infected. Invading bacteria also display similar markers, aiding the immune system in finding and targeting them.

But in cancer, your own cells appear just like they always do, even while they are multiplying uncontrollably. Your immune system has no way to distinguish these multiplying cells from healthy cells, and so it doesn’t know to attack the tumor.

In Fan Wang’s lab at Duke, we use the rabies virus and special dyes to trace the paths of individual neurons in a mouse’s brain.

It turns out the polio virus can do this. Because tumor cells are growing and multiplying rapidly, they look a lot like muscle cells in a healthy, growing child – polio’s prime target. Infection of these cells results in muscle loss seen in some children with the disease. From here polio can infect neurons that activate these muscles, causing paralysis. In that sense, it uses the same process of entry into the nervous system as the rabies virus, which I and others in the lab of Fan Wang here at Duke use to trace circuits in the brain.

Like the rabies virus, most of the machinery in the polio virus is made to target and reproduce in these growing cells, while only one gene causes the actual disease. To get around this, associate professor of neurosurgery Dr. Matthias Gromeier deleted this polio disease gene and replaced it with one for the common cold. When tested in monkeys, the virus was found to be effective in targeting and helping to clear out brain tumors without affecting the nearby healthy neurons.

Gromeier and Duke neurosurgeons are injecting a form of the polio vaccine directly into human brain tumors in a Phase I trial they hope will lead to approval as a cancer treatment – and so far they  have had some encouraging successes.

The beauty of this treatment is that it might not be  limited to brain tumors. Gromeier is planning to test the virus in future clinical trials against prostate cancer, lung cancer, colon cancer, and many others.