Undergraduate research is kind of a big deal at Duke.

The grand finale of nearly 200 of this year’s undergrad projects was a giant poster session called “Visible Thinking,” hosted by the Office of Undergraduate Research Support  on April 22. 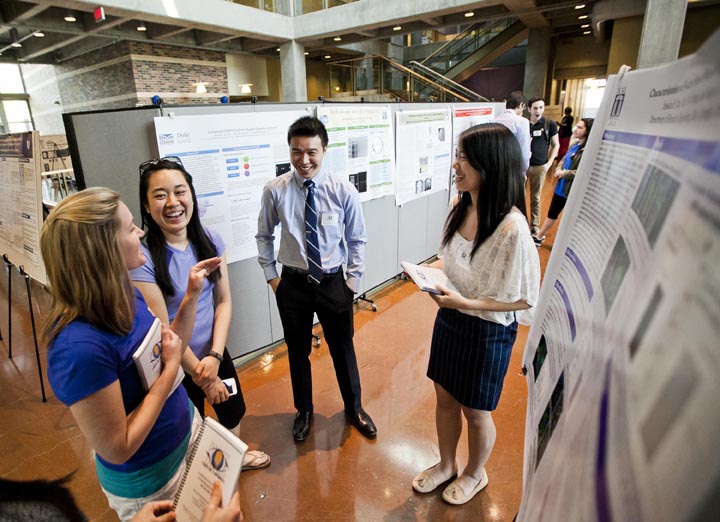 This annual showcase just keeps getting bigger, louder and more crowded, which is a great testament to the involvement of undergrads in all areas of Duke’s research enterprise.

The posters and proud students wearing their interview suits filled all the common areas of the first and second levels of the French Family Science Center on Tuesday and spilled into a few out-of-the-way corners as well.

“For many of the students this is the culmination of their four years, in which they’ve made that transition from student to scholar,” said Ron Grunwald, director of the URS office. “They’re no longer simply learning what other people have discovered, they’re discovering things on their own.”

Indeed, Rebecca Leylek wasn’t the least bit discouraged by having to check her experiment every six hours around the clock for days on end to see how the mice’s wounds were healing. The second phase of her project was a protocol she developed and got approval for and it didn’t have the six-hour part. She’s off to grad school at Stanford in immunology.

Ani Saraswathula, who co-chaired the Duke Undergraduate Research Society, apparently missed the deadline for getting his poster into the printed program, but his science on brain tumors was pretty awesome. He’s sticking around after graduation for an MD/PhD at Duke.

And then, there was just an amazing assortment of stinky lemurs and pathogenic yeast and budding investigators talking curious faculty and students through amazing posters like this: Understanding the role of BNP signaling in pak-3 mediated suppression of synaptic bouton defects in spastin null Drosophila.

So, in addition to quizzing the young scientists about their findings, we thought we’d ask a few of them to recite their impressive poster titles from memory:

Lawrence David Gets to the Gut of the Matter