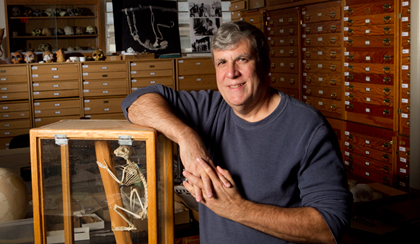 A newly discovered 25 million-year-old monkey fossil has been named for Gregg Gunnell, director of the Duke Lemur Center’s Division of Fossil Primates.

The thing is, Nsungwepithecus gunnelli, might turn out to be a pig. “It might be a ‘porky-pithecus,’ ” Gunnell said with a laugh.  “Early monkeys and early pigs looked remarkably alike.”

The fossil, from southwestern Tanzania, consists of a single molar. But it displays nine characteristics that would distinguish it from other Old World monkeys, according to Nancy Stevens, a paleontologist at Ohio University in Athens, Ohio who was the lead author on a paper about the discovery in Nature.

Gunnell’s monkey was found at a site in the Rukwa Rift Basin along with another new monkey fossil, Rukwapithecus fleaglei, for which scientists have a jaw and three teeth.  It too has nine distinguishing features. 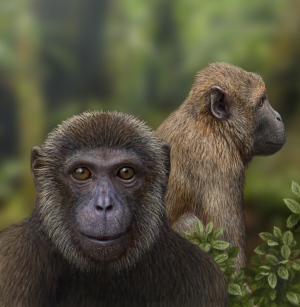 Gunnell said Stevens named the monkey after him to honor his role in helping her become a paleontologist. When Stevens was an undergraduate at Michigan State University, and Gunnell worked in the museum at the University of Michigan, he took Stevens and her now-husband and co-author Patrick O’Connor along on archaeological digs in Wyoming. Apparently the lessons stuck.

N. gunnelli is actually Gunnell’s third species. He was earlier honored by the naming of a bat and an extinct tillodont, which was, he reluctantly explains, a rather pig-like little animal.

“I’m hoping that this pig really is a monkey — that’ll improve my self-image,” he said.