Sleuths Take Over Science This Summer

While many teens spend their summer days playing Xbox and watching cartoons, some eighth and ninth graders are constructing catapults and dissecting cow knuckles as part of Summer Science Sleuths at Duke, a two-week program that exposes kids from across the country to science in fun and creative ways.

On a recent Thursday morning inside the Biological Sciences Building, the kids dissected cow fetlocks, which are similar to the upper knuckle joints in a human hand. There were looks of amazement, curiosity, and disgust as Dean Aguiar, program director at The Hartwell Foundation, demonstrated proper procedure with the fetlock.

“Feel free to take one home to barbeque,” Aguiar joked. Some of the kids weakly smiled, but overcame their queasy feelings the more they operated on the fetlock with their scalpels.

“It was cool,” said ninth grader Samantha Goetz from Cream Ridge, New Jersey. “The activity is similar to what I want to do when I get older, like surgery and such.” 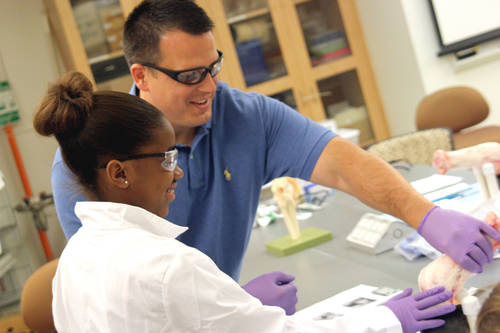 The point of the dissection was to have a better understanding of joint movement, as well as identify bone cartilage, ligaments, and synovial fluid, which is a lubricating liquid inside the joint that provides nutrients to joint tissues.

On other days during the two-week camp, the Sleuths created solar ovens, built rafts, and visited the Videri Chocolate Factory in Raleigh to learn how chocolate is made. The kids were housed in dorms at Duke and had picnics and cookouts on campus, as well as dinner at the Durham Bulls Athletic Park.

To be considered for selection to participate in Summer Science Sleuths at Duke, campers completed a survey on attitudes toward science, had a parent submit an application and had a teacher complete the recommendation form.

“This is the second year of the Summer Science Sleuths at Duke program,” said Chris Adamcyzk, executive director of the Duke Center for Science Education and creator of the program. “We want to make science fun for the kids,” she says. “ We carefully design the curriculum so that they can be introduced to a breadth of science, while making connections to their real world. Although they do experiments in the lab, they also interview scientists and take field trips to connect interesting science with everyday life.”

Fetlocks are similar to human knuckles, but a whole lot larger.

Making science fun for the kids is also the goal of Frederick Dombrose, President of The Hartwell Foundation, which funds the program.

“This wasn’t designed for kids who were at the top of their science class,” he said. “We created this for bright kids who have an interest in science so we can inspire them. This is an opportunity that most of them would’ve never been exposed to, so we want them to enjoy themselves and take advantage of this.”