Bacteria occupied Earth long before the evolution of humans. Inhabiting a wide array of environments and exhibiting unparalleled genetic diversity, bacteria share a unique relationship with humans.  Some of these microscopic organisms are essential to life while others threaten our very existence. 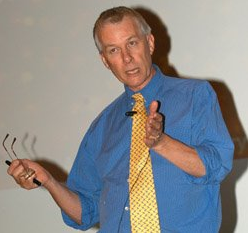 Sir Richard Roberts, a 1993 Nobel Laureate in Physiology or Medicine and a Fellow of the Royal Society, spoke about the importance of bacteria to the world of science on Thursday in an event co-sponsored by the Duke Institute for Genome Sciences and Policy (IGSP) and Quintiles, a clinical research organization.

Roberts articulated the importance of understanding the structure of macromolecules in order to understand their precise function: a principle he has used to build his own career. The molecular biologist was awarded a Nobel for his discovery of introns in eukaryotic DNA as well as for explaining the mechanism of gene-splicing.

According to Roberts, although bacteria are generally looked at in a negative light, most bacteria are harmless. He expressed concern about the indiscriminate use of antibiotics. For example, the strength of the farm lobby has prevented the strict regulation of antibiotics administered to animals in the food industry. Here, antibiotics are being used to make animals weightier rather than to fight an infection.

Misuse of antibiotics can help bacteria generate resistance, making fighting these microorganisms in the future more difficult. In fact, when we develop an antibiotic we are simply “selecting for the next drug-resistant bacteria, and we are polluting ourselves out of existence.”

“We tend to lose track of just how interesting bacteria are,” says Roberts. “There was a time when an awful lot of NIH funding was set aside exclusively for bacterial research.” However, now, NIH funding is focused primarily on eukaryotic organisms despite the indispensible role bacteria play.

Science Under the Stars