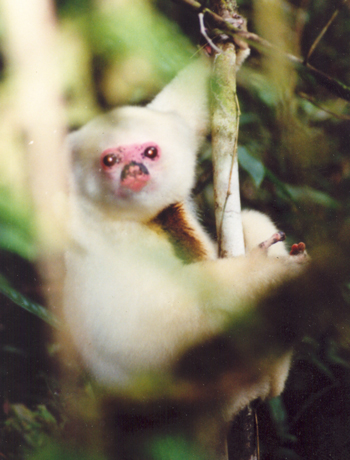 Primatologist Erik Patel is trying to study and save a cute lemur called the silky sifaka (Propithecus candidus).

In a recent online documentary, he takes viewers through Marojejy National Park, a 148,387-acre area of jungle with rugged mountainous terrain, and gives them a rare, up-close look at the silky in its wild habitat.

These lemurs are most at risk of extinction, which is one of the reasons Patel studies them, and, as the documentary shows, the illegal logging and bushmeat trade are likely accelerating the loss of the lemurs’ habitat and their overall population.

Patel, who will join Duke’s Lemur Center in January, told the New York Times that “stopping illegal logging in Madagascar will be impossible until the government stabilizes and some measure of accountability is put in place.”

“It’s about money,” as the individuals in government are now “organizing and profiting from the problem,” he told the Times reporter.

One of Patel’s roles when he joins Duke will be to oversee the Lemur Center’s new conservation initiative to help individuals in cities near Marojejy understand and value the distinct environment and animals found only in their country.