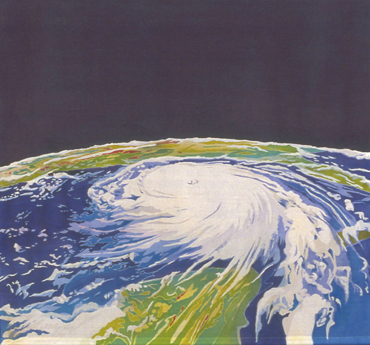 Seeing the satellite images of Hurricane Irene reminded me of a piece of art I’d seen a few weeks ago. It was a stunning wax-fabric batik of Hurricane Katrina by Mary Edna Fraser.

Flipping to a print of it in Global Climate Change: A Primer, I read about a few cities that were swallowed by the sea.

After being pummeled by three successive hurricanes in the late 1800s, citizens tore down their houses.

They packed them on sailboats and navigated them across Back Sound to Harkers Island, where they rebuilt them.

Today, in the U.S., 53 percent of the population lives on the 19 percent of land area near the coast, according to the Primer’s authors, geologist Orrin Pilkey and his son, Keith.

Imagine 165 million people tearing down their homes and moving them inland.