Pinpointing the Cause of Coughs and Sneezes

Duke students are trying to help doctors find a faster way to pinpoint the cause of their patients’ coughs, sore throats and sniffles.

The goal is to better determine if and when to give antibiotics in order to stem the rise of drug-resistant superbugs, said senior Kelsey Sumner.

For ten weeks this summer, Sumner and fellow Duke student Christopher Hong teamed up with researchers at Duke Medicine to identify blood markers that could be used to tell whether what’s making someone sick is a bacteria, or a virus.

More than half of children who go to the doctor for a sore throat, ear infection, bronchitis or other respiratory illness leave with a prescription for antibiotics, even though the majority of these infections — more than 70% — turn out to be caused by viruses, which antibiotics can’t kill.

The end result is that antibiotics are prescribed roughly twice as often as they should be, to the tune of 11.4 million unnecessary prescriptions a year.

Prescribing antibiotics when they aren’t needed can make other infections trickier to treat.

Fast, accurate genetic tests may soon help doctors tell if you really need antibiotics. Photo from the Centers for Disease Control and Prevention.

That’s because antibiotics wipe out susceptible bacteria, but a few bacteria that are naturally resistant to the drugs survive, which allows them to multiply without other bacteria to keep them in check.

Using antibiotics only when necessary can help, Ko said, but doctors need a quick and easy test that can be performed while the patient is still in the clinic or the emergency room.

“Most doctors need to know within an hour or two whether someone should get antibiotics or not,” Ko said. “Delaying treatment in someone with a bacterial infection could have serious and potentially life threatening consequences, which is one of the main reasons why antibiotics are over-prescribed.”

With help from Sumner and Hong, the team has identified differences in patients’ bloodwork they hope could eventually be detected within a few hours, whereas current tests can take days.

The researchers made use of the fact that bacteria and viruses trigger different responses in the immune system.

They focused on the genetic signature generated by tiny snippets of genetic material called microRNAs, or miRNAs, which play a role in controlling the activity of other genes within the cell.

Using blood samples from 31 people, ten with bacterial pneumonia and 21 with flu virus, they used a technique called RNA sequencing to compare miRNA levels in bacterial versus viral infections.

So far, the researchers have identified several snippets of miRNA that differ between bacterial and viral infections, and could be used to discriminate between the two.

“Hopefully it could be used for a blood test,” Sumner said.

“One goal of these types of assays could be to identify infections before symptoms even appear,” Ko said. “Think early detection of viral infections like Ebola, for example, where it would be helpful to screen people so you know who to quarantine.” 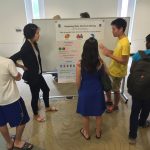 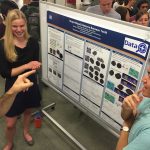 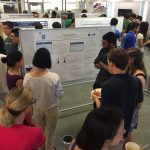 Sumner and Hong were among 40 students selected for a summer research program at Duke called Data+. They presented their work at the Data+ Final Symposium on July 23 in Gross Hall.

Data+ is sponsored by the Information Initiative at Duke, the Social Sciences Research Institute and Bass Connections. Additional funding was provided by the National Science Foundation via a grant to the departments of mathematics and statistical science.

Writing by Robin Smith; photos and video by Christine Delp and Hannah McCracken

Hugs Before Drugs – The Price of Emotional Neglect