The Science of Self-Agency: Dr. Nicolelis and the Walk Again Project 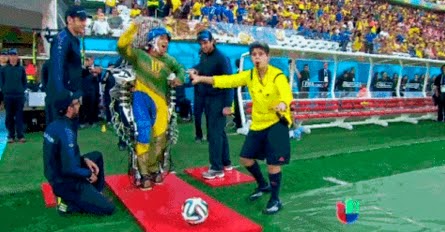 Screen grab from Univision of Juliano’s robo-kick at the World Cup opening ceremony.

Over the course of his 20-year career, Dr. Miguel Nicolelis has restored movement and self-agency to paraplegic patients.

On November 11th, as part of the Grand Challenge Seminar Series, Dr. Nicolelis captivated his audience by explaining the extensive process that culminated in Juliano, a Brazilian 29-year-old paralyzed from the chest downward in a car accident, performing the opening kick of the World Cup simply by using his mind.

Dr. Nicolelis has several faculty appointments in the Duke School of Medicine, Department of Psychology and Neuroscience, Institute for Brain Sciences, and Center for Neuroengineering. He has also written a book, Beyond Boundaries, about his work. His program, Walk Again, is supported by the Edmond and Lily Safia International Institute of Neuroscience in Brazil.

Dr. Nicolelis began making progress in 1999-2000 at Duke by developing electrodes that could record firing from multiple neurons. Using this technology, he determined which neurons were necessary for a monkey to move a joystick during a video game. Then, Dr. Nicolelis focused on creating a bypass that would bridge the mind directly to a computer, essentially removing the body as an intermediary.

He called this bypass a “Brain-Machine Interface,” or BMI, a term he coined at a cheese steak joint outside of Philadelphia. With the BMI, Dr. Nicolelis’s monkeys could play the video game without moving their arms or the joystick—they simply imagined themselves moving the joystick. The monkeys could even use their arms to do other tasks like eat or scratch themselves, creating a “third arm.”

Since then, with an extensive team of engineers, Dr. Nicolelis has implemented this technology by creating a

He has also created artificial “skin,” which provides tactile feedback of movement to a patient’s upper body or, eventually, through an implant directly to the tactile cortex of the brain.

The technology is so accurate that patients report feeling “ghost limbs”—they believe that their legs are actually walking. The legendary Brazilian soccer player, Ronaldo, reportedly exclaimed “I’m moving!” with incredulity, when he was strapped to a chair testing Nicolelis’s technology.

Dr. Nicolelis is truly using science to stretch the boundaries of the human body.

World Domination in a Loaf of Bread

Shedding Light on Careers Beyond Academia