Howdy everyone! My name is Thabit Pulak, and I am currently a freshman, hailing from the grand nation of Texas! Although I haven’t declared my major yet, I am interested in Public Policy, and Medicine.

My first batch of custom-made  water filters, fresh from the manufacturing plant in Bangladesh!

I’ve been interested in science ever since I was really young. As I got older, I became more aware of my surroundings. Ethnically, I am from Bangladesh, which is a poverty-stricken nation. Amongst the many problems the country faces, one that personally caught my eye was that of arsenic water poisoning, which affects nearly 70 million people in Bangladesh, and about 300 million people across the world. Continually drinking arsenic-tainted water results in arsenicosis, which is a chronic state of arsenic poisoning that gradually develops into various types of bodily cancers. So I thought, if exposure to arsenic was reduced, then the incidence of cancer would decrease as well.

Studying the issue closer, I noticed that solutions for filtering arsenic from water did exist, but they were very expensive (nearly $70) for the average villager, who makes around $1 a day. This was definitely a problem, as what good use was a solution, which was financially inaccessible to the target audience?

My meeting with the Minister of Bangladesh

I started to delve into this problem, trying to figure out what I could do. I read research articles on how other filters on the market worked. I noticed that the technologies used in other filters were plagued with various problems that brought cost up, such as being patented, or technologies not available natively in Bangladesh. Working in the kitchen of my home in Texas, I slowly developed an arsenic water filter that could also filter bacteria from water at an affordable price. I designed my filter in such a way that the whole filter could theoretically be built using materials in a typical village home.

Throughout the process of working on this project, I had the privilege of meeting many people who supported me along the way. I met with Bob Perciaspe, who at the time, was the head administrator of the EPA. I also met with Senator Ted Cruz of Texas, who lent me his endorsement towards carrying on with my work, with the future focus of expanding into rural areas into Texas, which also include arsenic affected regions. And, to my huge surprise, I was invited to the White House and met with President Obama!

I am now working on implementing my design. I founded iKormi, a non-profit organization, with the goal of alleviating problems faced by the underprivileged, in which my primary focus was arsenic water poisoning. Using some grants and money I raised, I was able to start up a small water filter plant in Bangladesh which manufactures arsenic water filters according to my design, consisting completely of local materials, using local labor. The filters were being built at a tenth of the cost. In addition to the manufacturing process, I also was able to gain support of many influential people in Bangladesh, including the Minister (and former general secretary) of Bangladesh. While there is definitely a lot more work to do, I definitely look forward to expanding this operation to be able to serve a wide variety of people who need access to clean drinking water.

At Duke, I hope to continue with my work in Bangladesh through the wealth of opportunities available to students in terms of research and working abroad. I look forward to writing for the Duke Research Blog! 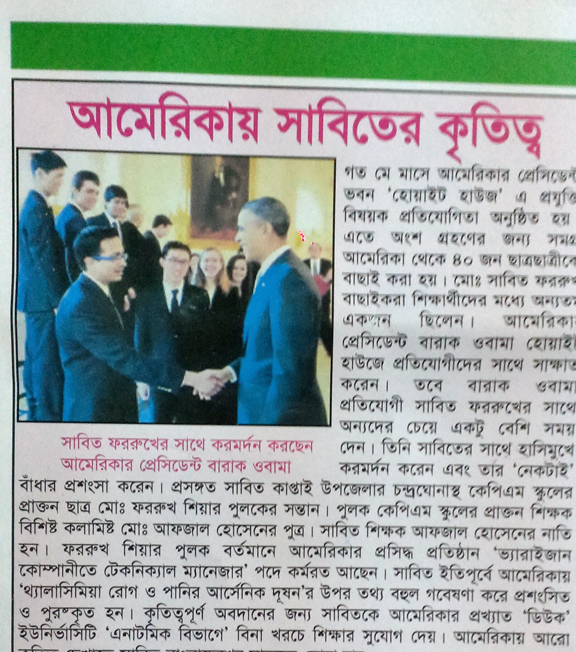 Me and President Obama in one of the Bangladesh national newspapers!

Scents Are Key to Lemur Nightlife

Rationing is Not a Four-Letter Word