The Mystery Behind the Camel Statue 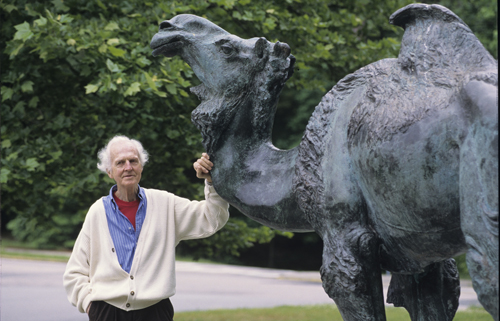 A file photo of the real Knut Schmidt-Nielsen, not the bronze one, standing with the enigmatic camel statue dedicated to him and his work.

The camel statue between the Biology Building and Gross Hall is a staple of Duke’s campus, but the significance behind this landmark is generally unknown.

On Monday, September 22, faculty from the Biology Department gathered for a dedication to remember the man behind the camel statue (or rather, in front of it), Dr. Knut Schmidt-Nielsen, who died in 2007.

Knut Schmidt-Nielsen, who would have turned 99 this Wednesday, was “the father of comparative physiology and integrative biology” and a James B. Duke professor at Duke’s Biology Department starting in 1952.

Schmidt-Nielsen studied the physiology of the camel’s nose, received the International Prize for Biology, and wrote the authoritative text on animal physiology.

Dr. Stephen Wainwright, who was present at the dedication, commissioned the camel to British sculptor Jonathan Kingdon, who finished the bronze camel statue in 1993. The inscription for the statue, “Tell me about yourself, Camel, that I may know myself,” encapsulates Schmidt-Nielsen’s outlook on physiology.

According to Dr. Steven Vogel, who was recruited to Duke’s faculty by Schmidt-Nielsen 49 years ago, Schmidt-Nielsen was actually shy and rather uncomfortable with the statue of himself. Vogel reported that Schmidt-Nielsen greatly advanced the zoology department with his high standards and “great charm and urbanity.”

“You could never say no to Knut,” Vogel said. Schmidt-Nielsen was also reportedly  “a very serious wine drinker”—accordingly, the dedication ceremony ended with wine and champagne.

To learn more about Knut Schmidt-Nielsen, read Vogel’s memoirs or a recommended autobiography, The Camel’s Nose. 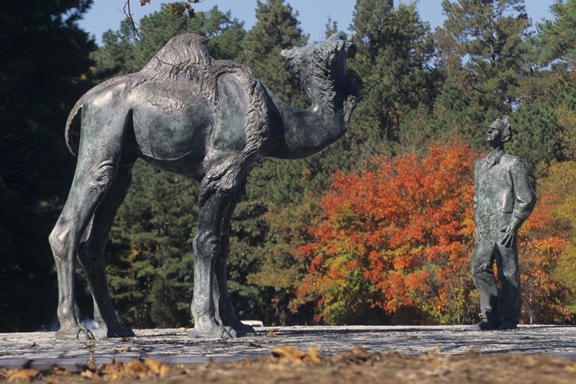 The statue as it appears now, with Knut in bronze. (File photo)

An Intersection of Math and Medicine: Modeling Cancerous Tumor Kinetics