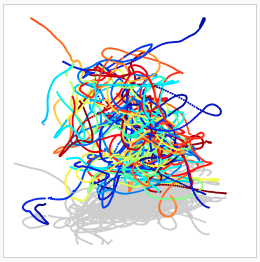 Dr. Nicholas Ouellette looks for the organization in disorder.

Ouellette, associate professor in the mechanical engineering department at Yale University, studies collective motion in animal systems. On February 17, he presented his models of swarming of Chironomus riparius, the non-biting midge, as part of Duke’s Physics Colloquium. Ouellette ultimately hopes to pin down fundamental laws of biology through his physics research.

In the lab, Ouellette has found that Chironomus insects swarm in a columnar, teardrop shape in the center of their container. They only live in their flying state for two to three days, during which they mate, lay eggs and die. During this period, swarming affords them protection from predators and the opportunity to mate.

Ouellette and his lab have devised various methods of modeling the insects’ swarming. They found that the insect density remains constant, and that the “scattering,” or collisions of insects, mirrors that of an ideal gas over long periods of time. Interestingly, the graph of individual insect speed follows a Maxwell-Boltzmann distribution, even though the lab did not track the usual factors that create such a distribution, like temperature.

The most pressing question Ouellette would like to answer is which factors create a swarm—he has determined that close insect-insect repulsion contributes to swarming, but distant insect-insect attraction does not. To pursue this question, Ouellette is testing how many insects it takes to make a swarm.

Four Things You May Not Know about Ecologist E.O. Wilson