Why Meteorites Are So Hard to Find in North Carolina

Note: This is the first in a multi-part series following Nick Gessler’s course on meteorites and the history of the solar system. Astronomy enthusiasts should check out the North Carolina Museum of History’s Astronomy Days happening this weekend, Saturday, January 25. 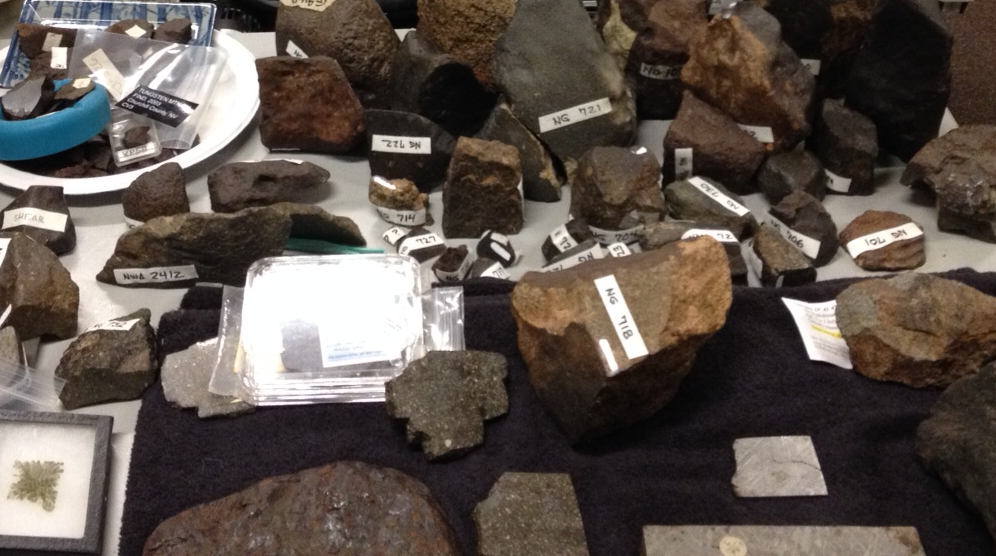 Visitors to Nick Gessler’s lab can touch the moon — literally — and a whole lot of meteorites (Photo: Eric Ferreri)

A meteorite hasn’t been discovered in North Carolina in over 80 years, but Professor Nick Gessler dreams that his students will be the first to break that streak.

On the first day of his class at Duke, Gessler hauled in three tables worth of meteorites, chunks of rock and metal that hurdled through outer space for millions, even billions of years before surviving the descent into Earth’s atmosphere. Among his collection are pieces broken off from the moon, Mars and the dramatic Chelyabinsk meteorite that lit up Russia and YouTube in February 2013.

“That’s what they look like,” Gessler said, gesturing toward one table. “They’re ugly rocks.”

That’s not entirely fair. Past their melted, black crusts, most of the meteorites glint with flecks of iron. Some thin slices, when finely polished and held up to a light source, resemble stained glass. But ugly or no, the rocks have captivated human interest since people first observed them falling from the sky. Now, they’ve attracted Duke students in wide-ranging fields, from English and history to mathematics and engineering, united by a common interest in the extraterrestrial.

Gessler has a couple of theories about why North Carolina has seen a dearth of meteorite discoveries. First, farming practices have changed — farmers found many meteorites while tilling their land and dislodging the stony debris. These days, farmers rely on heavy machinery unfazed by rocks.

Second, Gessler thinks it’s possible that, despite our astronomical advances, light pollution may have clouded our chances of seeing minor meteors falling to earth.

“Maybe people just don’t look up at the sky like they used to,” he said.

Throughout this course, it seems certain his students will be looking up. Each has been assigned a North Carolina meteorite to research — they’ll ferret out old newspaper clippings and find when and where it fell, whether the land is private and what the likelihood of finding remnants now might be. Gessler will instruct them on the art and science of meteorite hunting, and eventually the students may put their skills to work in the field.

And who knows — some of them might even find the meteorites beautiful.

Supernova Explosion in M82: Exciting, but No Neutrinos

Mining Appalachia has permanent effects on its landscape