Brian Hare wants to know why humans are such big babies.

Well,  that was just the provocative title for his Center for Cognitive Neuroscience talk on Oct. 2. What he wants to know is what happens in the development of human babies that socially advances and separates them from their animal counterparts.

Hare, an associate professor of evolutionary anthropology, discussed human evolution and comparisons to our ancestors and chimpanzees, bonobos and even dogs. He explained that the idea of comparing humans to other species suggests that “something very fundamental happened during human evolution that makes us human– a shift in human development.”

First Hare attempted to evaluate whether certain advanced capabilities of humans are present in other species. One means of doing this was by examining if other species think about the thoughts of others. In a video from an experiment  “Gaze” that Hare conducted, he looks at a chimpanzee named Dorene, and then suddenly glances upwards. The chimp follows suit, gazing up at the ceiling to see what Hare is looking at. From this behavior, Hare inferred that chimpanzees are in fact capable of thinking about the thoughts of others, like the human species.

This led Hare to examine another behavior that is advanced in humans: cooperation. Hare explained that in previous laboratory research, chimpanzees were found to be incredibly uncooperative. Hare’s studies in the field, however, proved the opposite. In an experiment with Alicia Melis and Michael Tomasello, two chimps were put in adjacent, but separate rooms. A treat was visible with a string leading to each chimpanzee. If one animal pulled the string, it just got the string. But if both pulled cooperatively, they ended up with the food. The researchers found that 95% of the chimps could work together to solve this problem to get an equal payoff for both of them. Hare did note, however, that if the chimps had communicated, they could have solved the problem more efficiently.

This showed that where chimpanzees might differ from the human species is in their inability integrate cooperation and communication. With children, Hare explains, this is a fundamental part of development that is established early in life. Because of this, Hare wondered if there is something motivationally different about the structure of cooperation between humans and other species, something that also shows early in development.

When humans work together, Hare said, they understand they have a shared goal and will adjust to different roles to complete the task. This has led to, from an evolutionary perspective, a very “strange” behavior in humans, in which they do things together simply because they like to. Hare calls this “we psychology.” Hare showed two videos side by side: one of his son rolling a ball to his mother, Vanessa Woods, and another of a chimp in a cage rolling a ball with Woods. When Woods stopped playing the game, the chimp reached out of the cage and grabbed her arm and pushed the ball so it would roll back to him. From this, Hare inferred that, like humans, chimps may also have a small tendency for “we psychology.”

In another study, Hare compares two-year-old children to adult and juvenile chimpanzees. In terms of physical cognition, the species were very similar to one another. On the social problem solving front, however, human children were already outperforming juvenile and adult chimpanzees. This study, along with the culmination of his earlier research, reinforced Hare’s idea that something very fundamental happens early in human development that differentiates human’s social and communicative capabilities from other species: domestication.

“It’s not just that kids are solving problems better, but it may even be that the way kids cognitively organize has changed,” he said.

Hare explains that just knowing the cause to be domestication was not enough, however. He wanted to understand how this worked. Hare referenced extensive breeding research conducted by Dmitri Konstantinovich Belyaev, in which he studied the domestication of the fox. Not only did these foxes show behavioral changes due to domestication, they also displayed morphological and physiological changes: floppy ears, curly tails and high levels of serotonin. Belyaev also found that, like humans, foxes use gestures and communicative cues. So, Hare concluded that the process of domestication influences a realm of social and biological characteristics and could be manipulated and interpreted in many different ways, especially in our own development.

By Madeline Halpert, Class of 2019

Research has shown that nicotine replacement therapies such as the patch, gum lozenges and nasal spray are only 25 percent effective in smoking cessation within the first year of use.

Jed Rose, Director of the Duke Center for Smoking Cessation, thinks the use of e-cigarettes, or electronic nicotine delivery systems (ENDS) could be a better way to quit smoking.

Rose spoke Tuesday in a session sponsored by the Center on Addiction and Behavior Change.

He said nicotine replacement is delivered at a slower rate and a lower dose than in actual cigarettes, so it fails to curb craving among smokers. Replacements also don’t replicate one of the main sensory behaviors of smoking: inhalation.

Rose discussed a study in which he and his colleagues anesthetized participants’ airways to see if they could detect the smoke, while keeping the same dose of nicotine to the brain. When participants couldn’t feel the smoke as much, there were more cravings for cigarettes and less satisfaction. 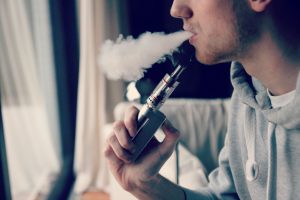 They’ve also found that replacement treatments, when given on a temporary basis of just one year, often resulted in relapse.

So what does an e-cigarette actually do? The battery of this electronic cigarette heats an oil that vaporizes the nicotine with a substance called propylene glycol. The gas is released and condenses immediately into a cloud of smoke.

Why is the e-cigarette safer? It’s the combustion products in smoke, rather than the nicotine, that are responsible for most smoking-related disease. Rose cited the 2010 Surgeon General’s Report that backs up this claim that nicotine itself is not responsible for cardiovascular problems or cancers.

Rose thinks that e-cigarettes could be the best of both worlds, allowing smokers the same sensory effects they enjoy, while possibly avoiding other health hazards of regular cigarette smoking.

Rose also addressed concerns about formaldehyde being present in e-cigarettes. He says this is rare, and only occurs with e-cigarettes that have higher voltages which causes overheating to occur. While there is evidence from two trials that the new devices help smokers to stop smoking long-term compared with placebo, unfortunately, very few studies have looked at this issue. Rose also shares concerns that the new product could be picked up by youth who wouldn’t normally smoke cigarettes, or serve as a gateway between e-cigarettes and real ones.

In the end, however, he thinks this product has the potential to be highly effective in treating addiction, and hopes it will be evaluated further.

“The agency that has to sort through this is the FDA,” he said. “They have to prove that it will help society as a whole. It has to benefit the health of the population.”

Hi! My name is Madeline Halpert and I am a freshman at Duke this year. I grew up in Ann Arbor, Michigan, so I’m very excited about the Durham weather, and to be a writer for the Duke research blog!

Although I do not have an extensive background in science, besides the typical high school science courses, I look forward to the many opportunities to learn about the scientific field here at Duke. I have some experience in journalism, as I was an editor-in-chief of my high school newsmagazine. I have also written an op-ed in The New York Times as well as a piece for Scholastic’s Choices Magazine about teenagers who have struggled with depression. In the past I have enjoyed writing in-depth feature stories about topics such as the pressures of the high school educational system, mental health and incarceration. This year, I am excited to broaden my areas of expertise and try a different style of writing. I think the Duke research blog will be the perfect place to do that.

Over the next four years I plan to take a variety of science courses, and try out some of the wonderful research opportunities Duke has to offer.

Although I am not certain of my major, I am leaning towards studying English and perhaps obtaining a certificate in journalism. In my free time, I enjoy long distance running and playing guitar, and am happy to be a part of The Chronicle and the running club this year.

I’m very much looking forward to learning about different types of research and researchers, and sharing my experiences via blogging!