When I go home and reminisce with family about road trips we took or embarrassing moments they facilitated, eventually we’ll disagree on “what actually happened.” We’re all so certain—our memories unfold vividly yet contrarily. It’s clear the past can be subjective, but why is this so?

As part of Duke University’s Brain Awareness Week, I went to a talk at Fullsteam Brewery on imagining alternate realities by Dr. Felipe De Brigard, Assistant Professor of Philosophy and member of Center for Cognitive Neuroscience. De Brigard began by discussing studies of patients with hippocampal atrophy (as in amnesia, PTSD, and severe depression) struggling to place themselves in both the future and the past. Their impoverished answers contrast with those of healthy controls, suggesting a link between areas of the brain accessed for recalling the past and picturing the future.

Dr. Felipe De Brigard presents his recent studies on the relationship between the neural default network and autobiographical thoughts at Fullsteam Brewery 3/19.

De Brigard buttressed this by displaying fMRI neural images of parts of the brain used when imagining future events and evoking memories. These parts encompass the default network: a system of functions and firings executed when the brain is not engaged in a specific task. Evidence shows the default network allows engagement in “mental time travel” or the projection of oneself into the future or onto the singular, objective past. This assumption leads to temporal asymmetry: only one past exists with which the imagination can corroborate yet it can visualize limitless possibilities.

De Brigard challenged this view: what if the default network works in both directions? He argues that the parts of the brain used for imagining possible futures also allow us to conceive potential outcomes in our past that did not occur, the process of counterfactual thinking. He has found that when contemplating an alternative reality considered likely to have occurred, the brain behaves as if it were remembering. Memory is not haphazard reproduction but probabilistic reconstruction — our memory is constantly rebuilding the past with both fact and what are likely facts, and frequently the distinction is blurred.

A fascinated and packed Fullsteam; many audience members were at their second or third event for Brain Awareness week at Duke.

“Perhaps we should cut Brian Williams a little slack?” De Brigard chuckled. Ample evidence shows that engagement in especially rich and detailed counterfactual thinking can increase the probability of constructing — and believing the authenticity of — false memories.

More intriguing than pardoning Williams are potential contributions to treatment of anxiety, depression, and PTSD. A common debilitating trigger among these disorders is repetitive counterfactual thinking, “I shouldn’t have said that, I shouldn’t have said that.” Perhaps with further study on the default network and its relationship to autobiographical contemplations, neuroscientists might develop tools to alter the pathways or functionality of the default network.

As for my family, they have some major counterfactual thinking patterns to alter; my memory is immaculate.

“The only reason I got into the program I wanted to was because I was a pretty good low brass player—I’m actually sure of it!”

Stephen Nowicki, Dean and Vice Provost of Undergraduate Education, chuckles as he recounts his journey from early scientific beginnings to his most recent research. As part of Duke BioCoRE program, prominent Duke Scientists are asked to answer the question, “Why am I a scientist?” 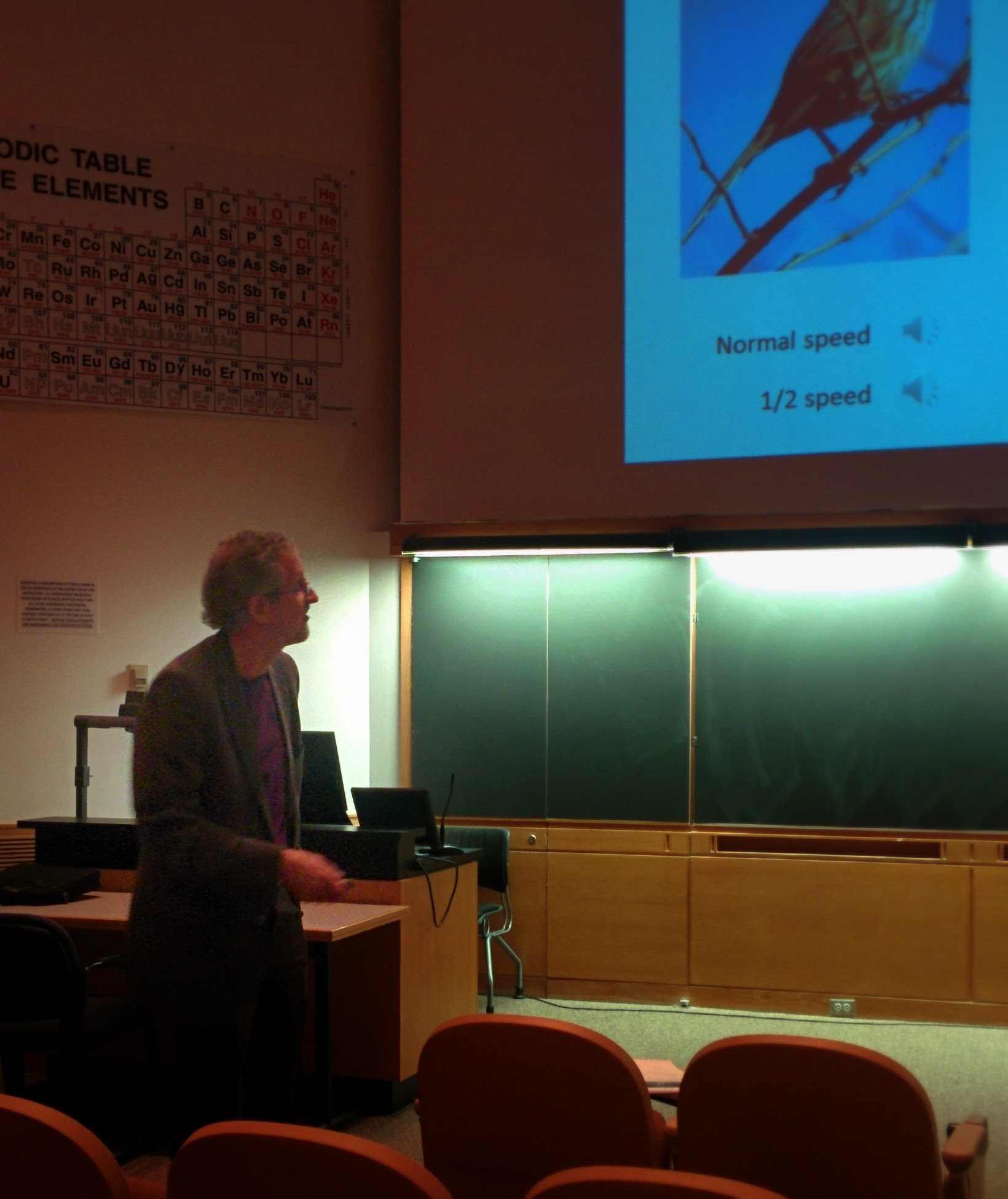 Nowicki explains his most recent research with swamp sparrows and phonemes, the smallest derivative of vocal communication, at Love Auditorium January 23, 2015.

Nowicki started his answer to that question on January 23 with a picture of a dissected—well more like massacred—frog, commenting that he never thought he liked science because of his high school science courses that were not well-taught.

“All I remember from that course was dissecting a frog, and not knowing what I was supposed to get out of it.” This led him to pursue a music major at Tufts University. It was Tufts’ equivalent of Duke’s Trinity requirements in a natural science field that led to an ironic turn of events—quickly picking up a biology double major.

“I had some friends that said ‘Oh you should take this biology course,’ and I did and it changed my life, because it was really well taught,” he said. From there, his mentor at Tufts reached out to a colleague, the head of a competitive graduate neurobiology program at Cornell, Tom Eisner. Eisner mentioned to Nowicki that he was looking to start an amateur orchestra at Cornell;  Nowicki responded that he could play lower brass, sparking Eisner’s interest, and ultimately, according to Nowicki, his acceptance into the program.

Flash forward about 30 years. Nowicki has an impressive career in the field of neurobiology. His most recent publication challenges the neurological methods in which swamp sparrows process the subtle differences of phonemes, the smallest derivatives of vocal communication, in other birds’ songs. 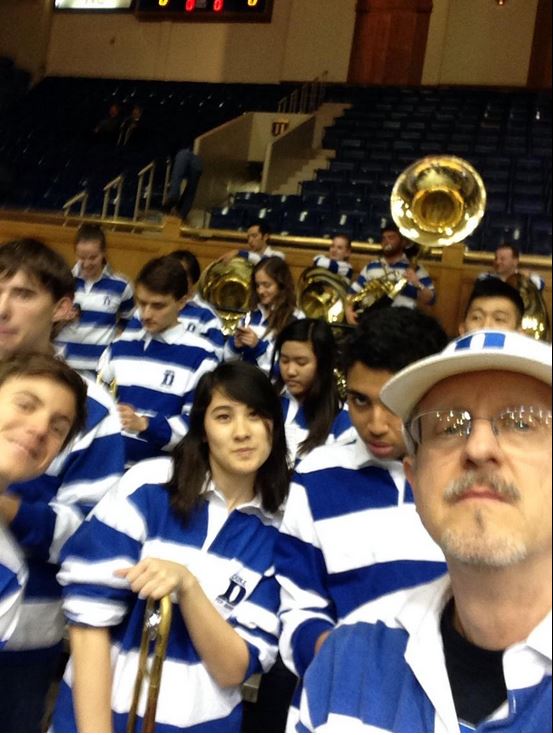 Nowicki’s tweet (@SteveNowickiDU) January 13, 2015. “Back where I belong at last!” Nowicki is a regular in the Cameron pep band who has always combined his passion for music with a curiosity for science.

Nowicki spent a majority of his talk relating entertaining anecdotes about his work with “Robobird,” a titanium swamp sparrow used to test these theories.

He repeatedly stressed the importance of curiosity, which led him to discover subjects he was passionate about. He discussed the process of instilling the same kind of curiosity in three undergraduate engineers through the two-and-a-half year research project. “[The first year engineers] didn’t have a clue, but they were not deterred. When they started to understand the problem they just kept digging in and digging in.”

When asked why he is a scientist, Nowicki responded, “I was lucky to run into mentors who revealed me to aspects of science that interested me, and I wasn’t afraid to fail.”

Hello world! My name is Duncan Dodson. I am a senior from Tulsa, Oklahoma, pursuing a BS in Environmental Science with a focus on Energy and Sustainability. Though my interests and academic pursuits at Duke have shifted over the course of my undergraduate career (I spent over half of it pursuing a mechanical engineering degree), a constant passion has been conservation of the environment. From age six I was involved in the Boy Scouts of America, received my Eagle Scout Award at sixteen, and have been an avid backpacker for five years. I recently co-directed Duke’s experiential education and backpacking based pre-orientation trip, Project WILD, and have been involved with various outdoor and environmental organizations the past three years.

Two things draw me towards exploring environmental issues: the impetus to think selflessly – environmental justice – and the necessity to approach problems on a larger scale – global climate change. Duke and my selective living group Ubuntu have challenged me to explore how we interact with the world around us in both wonderful and destructive ways.

My other budding passion at Duke is education. Challenging knowledge and ideas by informing and listening is a key part of learning. Transitioning from a more homogeneous community in Oklahoma to the vibrant and varied Triangle Area has framed my education in this respect. This is why I applied to write for the Duke Research Blog. Informing others of energy and sustainability research at Duke excites me; having an open forum where exposure to contrary opinions is expected impassions me.

Hopefully my exploration is as intriguing for readers as it is for me!