My Brain and Your Brain Speak Different Languages

The fact that “different people speak language differently” is one of the major challenges in uncovering the neural basis of language. Brain structure and function differ highly among individuals, and this is the core of the new discipline of cognitive neurolinguistics. Duke professor Edna Andrews explained the fascinating complexity of language research at the Regulator Bookshop on Tuesday, March 4.

Edna Andrews gives an overview of the new field of cognitive neurolinguistics at the Regulator Bookshop for Brain Awareness Week (Photo: Clara Colombatto)

A linguist by training, Edna Andrews is the Nancy & Jeffrey Marcus Distinguished Professor of Slavic & Eurasian Studies, Chair of the Linguistics Program and holds appointments in Cultural Anthropology and the Duke Institute for Brain Sciences. Over time, Andrews’s research interests led her to neuroscience — so she went back to the classroom, studied as a beginning student with neurobiologist Gillian Einstein and shadowed a team of neurosurgeons at Duke Hospital.

This range of disciplines is fundamental for Andrews’ pioneering work in the field of cognitive neurolinguistics. Observations of brain-damaged patients led to a 19th century model that held that language centers are mainly in the left hemisphere of the brain. In particular, language was thought to be dependent on grey matter, the part of the brain that contains mostly cell bodies and is responsible for information processing, as opposed to white matter, which contains mainly long-range connection tracts (axons) and is responsible for information communication. Researchers realized this understanding was an oversimplification when surgeons started to notice that cutting white matter tracts alone significantly impaired linguistic abilities. New methods, such as electrical stimulation of the brain during surgeries in awake patients, led to the realization that the whole brain is involved in language.

White matter fiber tracts visualized with a tensor imaging technique. Findings that the fibers  connecting the two hemispheres are essential for language revolutionized the field of neurolinguistics.
(Photo: Thomas Schultz via Wikimedia Commons)

When theoretical linguists such as Andrews joined the conversation, they merged empirical data with theory to answer questions such as, is language learned or innate? Are there specific structures and localized circuits in the brain responsible for language? And are there critical periods where our brain is particularly sensitive to changes?

The picture is complicated by the fact that “most of the world population is bi or multilingual,” and “one could argue that in fact there are no monolinguals.” In our daily lives, we use different languages at school, at work and at home (Learn more about this hypothesis here). Andrews’ current work addresses these complexities by looking at changes in neural activity as individual speakers acquire Russian as a second or third language. Her latest book “Neuroscience and Multilingualism,” coming out at the end of the year from Cambridge University Press, is an exploration of the neuroscientific modeling of multilingualism.

The lecture was part of Brain Awareness Week, a global campaign to encourage public interest in the progress and benefits of brain research. Not to miss: Michele Diaz on “Language and the Aging Brain” on Thursday, 3/5 at 7:30pm, and Richard Mooney on “Music and the Brain” on Friday, 3/6 at 6 pm at Motorco Music Hall.

In a recent conversation over Skype, renowned ethicist Peter Singer encouraged a group of Duke students to “think from the point of view of the universe” and use their education to alleviate suffering in low-income countries.

Singer, the Ira W. DeCamp Professor of Bioethics at Princeton University, has published numerous books on ethics and animal rights and spoke to Duke students about effective altruism on October 22.

Altruism is not about ethical pureness and spiritual nobility, Singer said; rather, he believes individuals should focus on the ultimate result of their actions. This is effective altruism–helping others while making sure one’s efforts are well directed and the best use of time and resources.

As an example, Singer pointed out that $40,000 could train one guide dog for a blind individual, but that same amount could prevent blindness for 100 people in a low-income country.

Research shows that not all charities are created equally–some are a hundred or even a thousand times more effective than others. Give Well is an agency that assesses the impact of charities, and of hundreds companies screened, the agency recommends only three: Against Malaria Foundation (AMF), which provides insecticide-treated nets in sub-Saharan Africa; GiveDirectly, which distributes cash to extremely poor individuals in Kenya; and Schistosomiasis Control Initiative (SCI), which assists African governments with treatment of neglected tropical diseases.

The Skype conversation was organized by the Duke chapter of The High Impact Network (THINK), a group that promotes effective altriusm. THINK organizes meet-up groups at universities and cities around the world to help members increase their positive impact in the world and create networks for support and collaboration.

The Duke chapter was founded by juniors Andrea Tan, Sheetal Hegde and Lainey Williams. The group unites students from different backgrounds–from public policy to neuroscience for discussion and service, including a partnership with Durham Urban Ministries to support student outreach and service.

Neuroscience research is finding its way into the legal system in an increasing number of cases. A panel of four Duke Professors explored the gap between laboratory and courtroom and its consequences on the attribution of guilt and responsibility in a Sept. 11 discussion at the Nasher Museum that was taped for broadcast on PBS-TV the next night.

“Every time we introduce new science into the courtroom, there’s an overconfidence by jurors in the science, as if that’s the objective truth,” said panelist Nita Farahany, Professor of Law, Genome Sciences and Policy, and Philosophy. But when transferring experimental evidence to real-life situations there are many caveats. 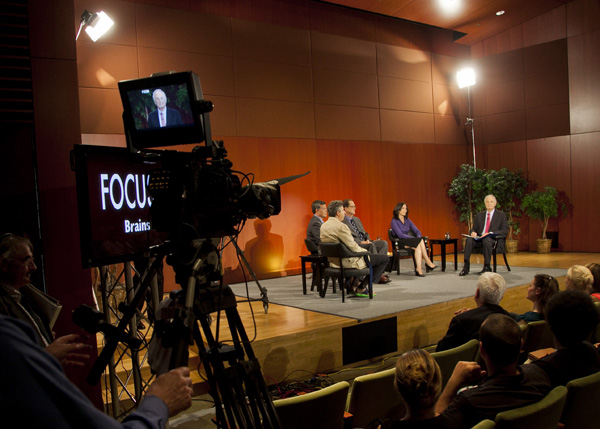 Farahany played a significant role in the two-hour  series “Brains on Trial,” a PBS special that explores the role and implications of recent advances in neuroscience in criminal justice. The show is hosted by Alan Alda, six-time Golden Globe winner and science journalist, who also moderated Wednesday’s discussion.

In addition to Farahany, the panelists were Ahmad Hariri, Professor of Psychology and Neuroscience and Investigator at the Institute for Genome Sciences and Policy, Scott Huettel, the Jerry G. and Patricia Crawford Hubbard Professor of Psychology and Neuroscience and Director of the Center for Interdisciplinary Decision Sciences, and Walter Sinnott-Armstrong, the Chauncey Stillman Professor in Practical Ethics in the Philosophy Department and the Kenan Institute for Ethics.

The Duke experts said neuroscientific evidence is starting to show the potential to determine, for example, if a witness is lying, if a juror is racially biased, if a brain disease impedes voluntary action, or if executive control regions are not yet developed in a juvenile defendant.

Some discoveries might save lives: Kent Kiehl, a professor of psychology, neuroscience and law at the University of New Mexico who has worked with Sinott-Armstrong, found that lower activity in the anterior cingulate predicts repeat offenses in psychopaths.

Hariri said his work is adding a piece to the puzzle by finding out how gene expression maps onto these brain pathways.

However, Scott Huettel points out that mistakes might arise from inaccurate generalization of function and anatomy that are unique to each individual, or from incorrect interpretation of a pattern of activation.

Hariri also warns about the risks of transferring results from an artificial laboratory setting to a real life situation which is subject to the forces of emotions and intentions.

Philosopher Sinnott-Armstrong raises ethical issues: brain imaging may violate privacy, and threaten our fundamental belief that we are in control of our thoughts, especially when those thoughts might be self-incriminating.

So the transfer of scientific evidence and legal cases is a sophisticated problem. While research advances, as Sinnott-Armstrong notes, “the court has to figure out the right procedure to minimize dangers while still extracting as much information as possible.”

Researchers from the Duke Global Health Institute (DGHI) are launching a study on psychological interventions for women with obstetric fistula in Tanzania this September.

A fistula develops during long obstructed labor: the fetus is stuck in the birth canal and erodes the vaginal tissue. After the traumatic labor experience and loss of the child, women return home and realize they constantly leak urine or feces. Moreover, they suffer from severe pain and are likely to develop urinary tract infections.

Women with obstetric fistula are stigmatized and ostracized by society, and spend years hiding their condition from others.

Aheyu, one of the protagonists in A Walk to Beautiful, a 2007 documentary about Ethiopian women with fistula.

Duke researchers conducted a series of interviews from 2010 to 2012 and found that this rejection and self-isolation leads to higher levels of depression, anxiety, and PTSD in women with obstetric fistula, even after a repair surgery.

Wilson is doing a dissertation on the project as a member of the DGHI’s doctoral scholar program.

Based on their empirical observations, Watt and colleagues developed interventions for women receiving fistula repair surgery. The aim is to reduce shame and reframe fistula as a medical condition rather than a personal failure. If successful, the therapy could be a model for treatment of mental health issues related to fistula.

Adapting western psychological therapies in West Africa is a difficult process: “The way we do therapy in the U.S. is very individualistic, emphasizing the idea that your own thoughts are the most important thoughts, versus the thoughts of your parents or your community,” Sarah Wilson says.

But “in Tanzania, identity draws upon family and community,” Watt says. To raise awareness and acceptance of fistula, the team has previously organized workshops.

While the last U.S. hospital treating fistula patients closed its doors in 1895, more than 2 million women live with fistula worldwide as of today. In this sense, “obstetric fistula is a terrible condition and embodiment of disparities in society and health care,” Watt says.