Your Brain Likes YOU Most

This is the third of eight blog posts written by undergraduates in PSY102: Introduction to Cognitive Psychology, Summer Term I 2019.

Imagine you’re at a party. You have a few friends there, but the rest of the people you don’t know. You fiddle with the beaded bracelet around your wrist, take a breath, relax your arms, and walk in. You grab some pretzels and a drink, and talk to this guy named Richard. He has a daughter, or a niece, or something like that. His moustache looked weird.

Okay, now quick question: would you remember if he was wearing a bracelet or not? Odds are you wouldn’t unless he had a bracelet like yours. In fact, it turns out that we recall things far better when those things concern ourselves.

Research has shown us that when it comes to what we notice, the quickest thing to grab our attention will be something we relate to ourselves, such as a picture of your own face compared to a picture of any other face. What still remains unknown however, is to what extent our prioritization of self plays an internal role in our processes of memory and decision making.

To explore this, an international team of researchers led by Duke’s Tobias Egner analyzed the degree to which we prioritize self-related information by looking at how efficiently we encode and actively retrieve information we have deemed to concern ourselves.

They did this with a game. Research participants were shown three different colored circles that represented self, friend, and stranger. A pair of colored circles would appear in various locations on the screen, then vanish, followed by a black circle which appeared in the same or different location as one of the colored circles.

Participants were then asked if the black circle appeared at the same location where one of the colored circles had been. The responses were quite revealing.

With nothing but perception and reaction time, the process demonstrated that this is not a conscious decision we make, but an automatic response we have to information we consider our own.

The experiment demonstrated that when it comes to holding and retrieving information on demand, the self takes precedence. The interesting thing in this study however, is that the self-related stimulus in this experiment was not a picture of the person, or even the circle of their preferred color, it was simply the circle that the researchers assigned to the participant as self, it had nothing to do with the participants themselves. It was simply the participant’s association of that circle with themselves that made the information more important and readily available. It seems that to associate with self, is to bring our information closer.

The fact that we better recall things related to ourselves is not surprising. As creatures intended mostly to look after our own well-being, this seems quite an intuitive response by our working memory. However, if there is anything to take away from this experiment, it’s the significance of the colored circle labeled self. It was no different than any of the others circles, but merely making it ‘self’ improved the brain’s ability to recall and retrieve relevant information.

Simply associating things with ourselves makes them more meaningful to us. 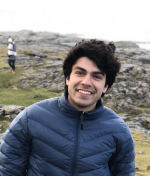