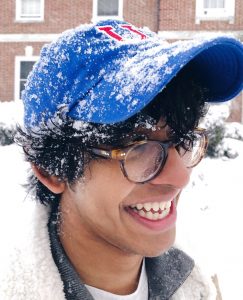 Let’s start with my name: Jeremy Abraham Jacobs. It’s a surprisingly Biblical one,
a name that draws more from the Judeo-Christian tradition than my
Indian roots. Jeremy, derived from the prophet Jeremiah and the depths of my mother’s imagination. Abraham, both the name of my father’s father and the patriarch of Judaism. And Jacobs, the latest Americanization of my family name Yakob, Chacko, then Jacob.

At the heart of my name is language, the offspring of a million-year synthesis of firing neurons, geography, and culture. I too grew up a child of intersection, living a blend of the Indian tradition my parents brought over with them and the rich culture of the Deep South that’s flavored ever moment of my life.

I’m a freshman here at Duke, with all the uncertainties—and possibilities—of an undeclared major. But my passion lies in the crossroads that has defined my life. I want to understand the inseparable intertwining of linguistics and neuroscience. And communication enthralls me, from the individual cells that make up the tongue to the Spanish pluperfect subjunctive.

Who knows if, after four years, organic chemistry will have knocked me off the pre-med track, or if English will still hold my interest as tightly as it does today? But for now, at least, mysteries like the power of a name still keep me invested in the intricate interplay of science and language. 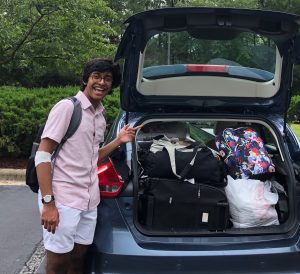 What cascading forces of nature and nurture brought my mother to a small hospital in Tupelo, Mississippi, where I came into the world kickin’ and screaming’ one hot July morning? Was there some memory burned into her hippocampus that caused her to choose the name “Jeremy” in a sea of Chad’s, Luke’s, or Matt’s? And how different would my life have been if my name were not Jeremy Abraham Jacobs but rather Aakash Bola, or Harley Covington Pike III?

It took generations of missteps, chance encounters, and biological improbabilities for this name to fall to me, for this name to be mine. Perhaps one day I’ll understand every aspect of my unlikely existence, every factor that led to the genetically unique organism currently typing up this article. More likely, though, is that I’ll spend my life exploring the unknown, learning more about my own place in the mechanisms of the world.

But I know, at least, that intersection follows me, even here at the Duke Research Blog. I’m thrilled to infuse my own mix of science, writing, and culture into each article I produce, so I can ignite the passions of others students of science who seek their own common ground.

HIV Can Be Treated, But Stigma Kills

Gene-Editing Human Embryos: What, How, Why?